Skip to content
2 Comments on Alfa Romeo’s Century to be Celebrated at Phillip IslandPosted in News By Stuart LiveseyPosted on December 23, 2009September 15, 2018 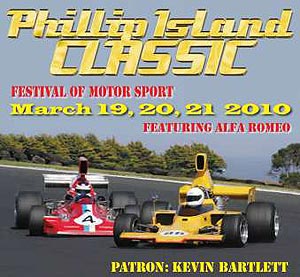 The Centenary of Alfa Romeo will be celebrated con brio at the 21st Anniversary Phillip Island Classic Festival of Motor Sport from 19-21 March 2010, with more than 100 examples of the feisty Italian marque taking to the Grand Prix circuit for a variety of events.

Kevin Bartlett, who won the Australian Drivers’ Championship (CAMS Gold Star) in 1968 and 1969 driving an Alfa-Romeo powered Brabham and Mildren open wheeler respectively, has been honoured as the Phillip Island Classic’s Patron.

Other well-known Australian drivers with noted Alfa Romeo racing histories, including Alan Jones, Colin Bond, Tim Schenken, Bryan Thomson, Jim McKeown and Frank Porter, are being invited to join him at the meeting.

An overall entry of around 500 touring, sports and racing cars spanning more than 50 years is again expected at what has become the largest classic motors sport festival in the Southern Hemisphere. 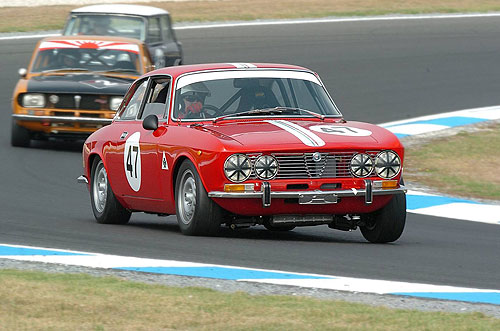 By Christmas – three months out from the meeting – the VHRR had already received a record 360 entries, including nearly 100 Group Sa, Sb and Sc production sports cars, more than 90 Group N historic touring cars and 100 cars in two Regularity divisions.

The meeting will also feature a record number of Formula 5000 racing cars on the grid, with over 40 of these thundering V8-engined open wheelers expected to line up.

Two Touring Car milestones will additionally be celebrated at the 2010 Classic. The 50th anniversaries of the Armstrong 500 – the progenitor of today’s Bathurst 1000 – and the 50th anniversary of the Australian Touring Car Championship, will both be marked with displays and parades of historic touring cars and their drivers.

The 2010 Phillip Island Classic Festival of Motor Sport is again being supported by Shannons, Penrite Lubricants and CoolDrive and will be conducted for the 21st year by the Victorian Historic Racing Register.

Alfa Romeo’s Century to be Celebrated at Phillip Island