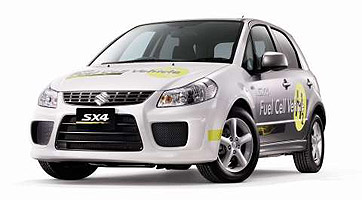 The Auto Expo 2010 has been on in New Delhi over the past few days and Suzuki chose it as the spot to unveil the Suzuki SX4 Hybrid concept. The new SX4 Hybrid is said to be fairly close to the fuel cell version shown here.

The SX4 Hybrid concept is powered by a 1.2-litre petrol engine engine coupled to an electric motor and lithium-ion battery pack. The model on display in New Delhi had a manual transmission but Suzuki has also tested it with a five-speed automatic as well.

It seems that Suzuki is not about to tell us whether or not this Suzuki SX4 Hybrid will actually make it to the production line.