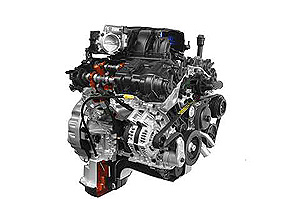 The Detroit Motor Show is starting and there’s plenty of news coming from a lot of manufacturers. On Saturday we saw Chrysler announce a range of cosmetic changes to a wide range of it’s vehicles including its Jeeps and all that did was raise a yawn but now there’s some much more interesting news from the struggling manufacturer.

Chrysler announced today that it’s revamping its powertrain lineup with technology that will contribute to an overall fuel-efficiency improvement of more than 25 percent during the 2010-2014 period.

As a result of the new alliance with Fiat, the company’s five-year business plan has an uncompromising powertrain offensive, including a progressive vehicle electrification strategy.

New Four-cylinder Engines
Four-cylinder engine options are being expanded at Chrysler Group with the introduction of Fiat Powertrain’s 1.4-litre, in-line four-cylinder Fully Integrated Robotized Engine (FIRE) featuring Multiair. In the early 1970s, the use of robotics in assembly plants was not common. The term “FIRE” came into existence when Fiat integrated the use of robotics in the production process of manufacturing plants. Although mechanized assembly is common today, the brand name FIRE has remained with Fiat’s powertrain lineup.

This sophisticated electro-hydraulic variable-valve actuation technology delivers an increase in power up to 10 percent, an improvement in low rpm torque up to 15 percent and a reduction in fuel consumption and emissions up to 10 percent when compared with similar engines without the technology. The Multiair system is based on a series of Fiat Powertrain patents related to hardware, combustion strategies and controls that allow for full control of the lift and timing of engine valves, independently on each cylinder and during each single engine stroke. Well suited for a small car application, the first North American vehicle to feature the 1.4-liter FIRE with Multiair is the Fiat 500.

Another addition to the Chrysler Powertrain lineup is the new 2.4-litre, in-line four-cylinder World Gas Engine (WGE) with Multiair. This new engine stands as an example of Chrysler Powertrain’s rapid integration of Fiat technology. Chrysler Powertrain’s 2.4-litre WGE features Fiat’s Multiair technology that will improve fuel economy and specific-power output. In comparison with its predecessor, the 2.4-litre with Multiair delivers an increase in power, an improvement in low rpm torque and a reduction in fuel consumption and emissions output. A turbo version of the 2.4-litre WGE also is under development for future applications.

All-new V-6 Pentastar Engine
Chrysler Powertrain will streamline its V-6 petrol engine offerings from six options to the new fuel-efficient, state-of-the-art 3.6-litre V-6 Pentastar engine. The first application of this engine will be in the all-new 2011 Jeep® Grand Cherokee, due out in the second quarter this year. Chrysler Group’s all-new Pentastar V-6 is the most advanced six-cylinder engine in the history of Chrysler, with an optimised integration of select technologies that deliver refinement, fuel efficiency and performance.

The Pentastar delivers a fuel efficiency improvement of up to 8 percent on average when compared with previous Chrysler Group V-6 engines and delivers 90 percent of its available torque from 1800-6400 rpm. In the all-new 2011 Jeep® Grand Cherokee, the 3.6-liter Pentastar V-6 engine offers an increase of 33 percent in horsepower and an 11 percent improvement in torque over its predecessor. The Pentastar V-6 is designed to use technologies such as Multiair, direct-injection and turbocharging for future applications.

New Transmission Technology
Beginning with mid-size D-segment cars in 2010, Chrysler Powertrain will migrate Fiat’s six-speed Dual Dry Clutch Transmission (DDCT) to Chrysler Group vehicles. The DDCT delivers a 10 percent improvement in fuel efficiency while enhancing performance. It transitions seamlessly from economy to sport mode when desired and can handle up to 350 Nm.

As part of its five-year plan, Chrysler Group currently is developing a Ram 1500 with traditional hybrid capability for 2010. The company also continues its plan with the Department of Energy to build a small test fleet of plug-in hybrid Ram 1500 pickup trucks and minivans. Because pure electric vehicles lend themselves to commercial applications, Chrysler Group is considering a small electric delivery van application for 2011-2012 with an appropriate business case.

The company has a significant amount of resources allocated toward vehicle electrification and affirms a commitment by continuing to add talent in this leading-edge technology arena.