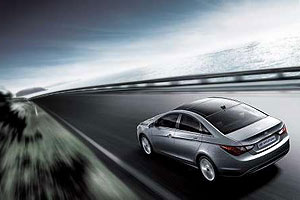 Hyundai Motor Company’s all-new mid size-sedan, which makes its debut in Australia in a few months, is already breaking records in South Korea, with 100,000 new contracts signed for the car since it went on sale on 17th September last year. The figure equates to more than 1,000 contracts per day since its debut in the domestic market and sets a new record in South Korea’s vehicle sales.

Considering the number of contracts signed so far for the all-new model, 10 months of sales have already been secured.

The much anticipated all-new mid-sized sedan, code-named YF, is due to enter the Australian market in the first half of 2010. Its ‘fluidic sculpture’ styling reflects Hyundai’s new design architecture, a philosophy which will make its debut in the upcoming all-new ix35 compact SUV, supporting a broader brand appeal.

“This is an exciting result, and we can’t wait to see how Australian buyers react to the car’s bold design,” said Oliver Mann, Hyundai Motor Company Australia’s Director of Marketing. “As well as the all-new sedan, we will also be launching the all-new ix35 SUV and i20 hatch this year.”