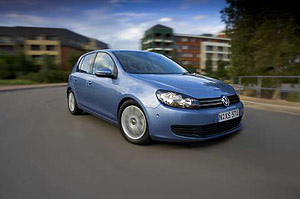 Volkswagen’s Golf has been awarded the 2009 Wheels Car of the Year.

The multi-award winning Golf has outclassed a field of 22 cars to collect what is widely considered to be Australia’s most coveted award. To have been selected for this award, the Golf had to impress eight judges over an extensive week of testing.

“The Golf oozes sophistication, refinement and development – in an energetic package that comes with fundamentally good steering and balance,” he said.

Veteran judge and former editor, Peter Robinson said, “The level of overall refinement is worthy of two classes higher … balance and weighting of all controls [are] BMW-like in their consistency and tactility. Ride and handling, best in class.”

Volkswagen last won the Wheels Car of the Year in 1976, also for the Golf. While two years earlier Volkswagen collected the award with the Passat.

Volkswagen Group Australia managing director, Anke Koeckler, said:” I am very pleased to have received such a prestigious award for the Golf.

“The Golf’s selection as Wheels Car of the Yearis the crowning achievement of an extraordinary year for the new Golf after already being named ‘Best Mid size car over $30,000’by Australia’s Best Car Award and winning the 2009 Carsguide Car of the Year and 2009 DRIVE Car of the Year awards.

“Winning the Wheels Car of the Year is proof the new Golf is at the pinnacle of automotive design and engineering yet is still attainable, a winning combination obviously,” said Ms Koeckler.

Volkswagen launched the Golf in 1974, it was built in Australia until 1977 before being replaced with a fully imported model from Germany. Now in its sixth generation, the Golf continues to hold universal appeal thanks to its original, unique and timeless design which creates a vehicle that is class-free.

The Golf, a perennial favourite in the Volkswagen line-up, has sold more than 26 million units in 120 countries, making it one of the top selling vehicles of all-time.