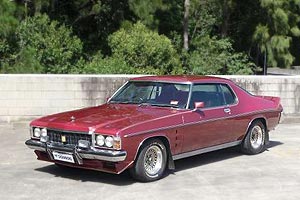 Shannons have the final coupe iteration of the original ‘Monaro’ series – an increasingly collectible Limited Edition 1976 Holden HX LE coupe – coming up at its Summer Classic Auction in Sydney on February 15.

While the HX LE did not physically wear the hallowed ‘Monaro’ nameplate, Holden fans regard it as a true blue member of the breed and now value it accordingly.

The HX LE came only as a package with Holden’s 308-cid V8, the Turbo-Hydramatic transmission and Salisbury limited slip differential – all high-performance Monaro hardware.

The HX LE being auctioned by Shannons was sold new in Toowoomba and remains in very original condition in the hands of its third owner.

It also has its original eight-track cartridge stereo system, which although not currently fitted, is included in the sale, along with a number of spare music cartridges.