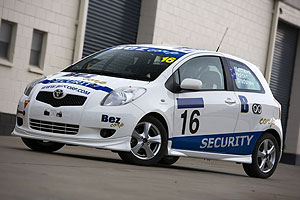 With all the problems that Toyota is having at the moment in other parts of the world a headline like the one that accompanied this announcement from Toyota was almost guaranteed to catch the attention of every motoring writer and scribbler.

Yep that was guaranteed to get everyone’s attention even if it was only a story about Bob Holden driving a Toyota Yaris in this year’s Bathurst 12 Hour Endurance Race. That headline sure works and even the Toyota Yaris Bob’s going to drive is eye-catching.

Touring car stalwart Bob Holden will contest his 35th race at Mt Panorama with the 77-year-old confirmed to drive a Toyota Yaris in this year’s Bathurst 12 Hour endurance race on February 14.

Holden, who won the 1966 edition of what is now the Bathurst 1000, will pilot the 1.5-litre engine Yaris YRX in the small production class with co-drivers Justin Matthews and Craig Bradshaw.

Holden has been racing for more than 60 years and is looking forward to returning to Bathurst in a car he has helped prepare and set-up.

“Our preparations are going along really well and we have already spent two days testing the car at Oran Park,” Holden said.

“I was pleasantly surprised how strong the Yaris performed, but I have always enjoyed racing small cars.”

The Yaris drive is a continuation of Holden’s long history racing Toyotas.

The combination claimed class victory at Bathurst in 1987 in an AE86 Sprinter and Holden still campaigns a Toyota Corolla in historic meetings.

“I still take great enjoyment from driving and the people involved in the sport, which is why I accepted the offer to drive the Yaris,” Holden said.

Team manager Paul Nelson who ran Holden in his Super Touring car team in the mid-1990s was pleased the veteran racer had agreed to lend his vast experience to his team.

“I wouldn’t go to Bathurst without him,” Nelson said. “Bob’s skill level is superb, he’s very gentle on equipment, understands the car and his lap times are still there.”

The Yaris will have a unique look for the 12 Hour. It will be dressed to look like a security patrol car from title sponsor BezCorp – a security monitoring company that runs a fleet of Yaris.

Three other Toyotas are entered in the Bathurst 12 Hour, where the Yaris will be joined by production car regular Lauren Gray in a Corolla Sportivo as well as two privately entered Celicas.