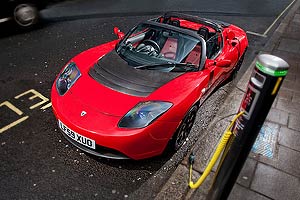 Tesla has announced the release of a right-hand drive version of their iconic Roadster that will be available globally.

You can even test-drive the right-hand version right now … if you happen to live in London … and thanks to British tax laws it is possible for the Tesla Roadster to cost you nothing because companies who buy the Tesla Roadster can take advantage of the 100 percent Write Down Allowance.

Sadly that’s not the case here in Australia but if you want an electric car that will accelerate faster than a Porsche and be twice as efficient as the Prius with a range of 320 km … and you can afford to spend around $158,000 … I guess the lack of tax write-downs won’t bother you too much.

But you will need to be quick … there’s a very good chance that Tesla won’t be building the Roadster in 2011.