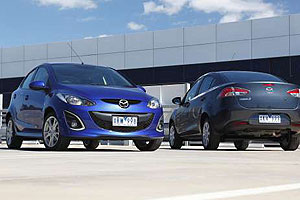 An updated version of the Mazda2, will hit Australian showrooms in May in both hatch and sedan body styles with what Mazda describes as “a dynamic new look” and equipment upgrades. Sadly it seems that the quirky Mazda2 design has gone and instead we have much more mundane looking car that could blend right in with the general “blah” designs of others in the small-car class.

Despite those apparently plain looks on the new Mazda2 Mazda would like to convince you otherwise.

“Mazda2’s combination of chic styling, Zoom-Zoom driving dynamics and spirited yet economical performance has seen it more than treble the sales volumes achieved by its predecessor. Over 35,000 Mazda2’s have been sold in Australia since its launch in 2007 making it one of the best selling lights cars in the country. This latest upgrade further evolves Mazda2’s award-winning formula and is expected to keep the model at the top of Australian buyer’s shopping lists.

“This is the first time that the Mazda2 has been offered in two distinct body styles and it is expected that customers will be attracted to the new Mazda2 sedan in part because of its styling and impressive 450 litres of boot capacity.

“Mazda Australia marketing manager, Alastair Doak said “Having listened to customer feedback and studied the light segment very closely, we believe that the new Mazda2 sedan offers the potential to engage with a whole new set of customers.”

“The Mazda2 sedan will offer a host of features including 15 inch alloy wheels, air-conditioning and power windows and mirrors. Safety is well catered for with front, side and curtain SRS airbags in addition to other safety features such as Anti-lock Braking System (ABS) and Electronic Brake-force Distribution (EBD). 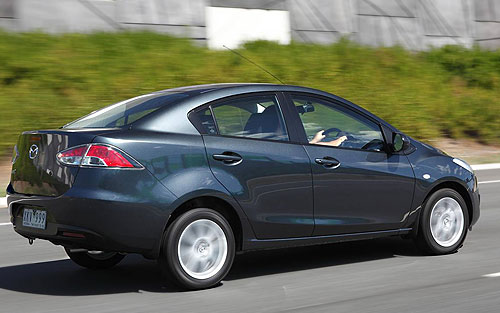 “The Mazda2 range will continue to be powered by a spirited 76kW 1.5 litre petrol engine and be available with both manual or automatic transmissions. Fuel efficiency remains impressive with the manual transmission achieving 6.4 litres per 100km.

The ability to offer Australian customers both body styles has been made possible by production moving to the state-of-the-art Auto Alliance Thailand (AAT) passenger car plant.”

A New but Bland Mazda2 is Coming