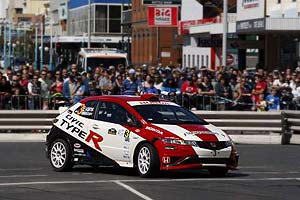 On Friday’s first leg over two competitive stages, Evans and Weston finished first and second to end the day second overall by just 0.3 of a second.

Confidence was high for a good result on Saturday’s second leg which covered eight stages. Despite problems with the championship control tyres, Eli still managed to grab a stage win, as well as a second and third place on two other stages in the morning. However as the day progressed the tyre situation became critical, and after a quick off-road excursion Evans backed off.. As a result he ended the day in eighth place.

The weather was cooler on Sunday for leg three and Evans was able to attack the eight stages with renewed vigour.

Over the first six stages the Tankformers Honda Civic Type R won three and placed second in the other three. At the start of the final stage, run around the streets of Burnie, the gear lever broke as Evans grabbed second gear off the line. Unable to change gears Evans cruised through the stage resulting in a slow time.