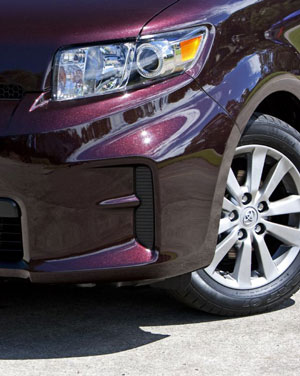 Toyota Australia announced yesterday that it will launch an all-new model for Australia, to be known as “Rukus”, before the middle of the year.

Reportedly based on Toyota Scion … a vehicle quite popular in the United States … Toyota describes the Ruckus as “an urban utility vehicle with head-turning styling the projects an aggressive appearance”.

“It will be a case of ‘Rukus’ by name and ruckus by nature,” Mr Thompson said.

“This is a car that’s designed to be different, with a boxy shape that has become iconic,” he said.

“When it’s launched late in the first half of this year, it will certainly stir up the small-car market – creating a ‘ruckus’, if you will.”

Mr Thompson said Toyota Rukus will be offered to urban dwellers as a blank slate.

“It will be loaded with great standard features, but we expect many owners to express their individuality by making their car stand out from the pack.

“That might involve wild paint jobs, funky wheels or other ideas, limited only by the imagination of owners – and what’s legal.

“Potential customers have told us they want this style of car. We’ve listened and we’re responding.

“Rukus is designed to be different: it’s not for everyone. It’s a bit like Vegemite: it’s an acquired taste,” Mr Thompson said.