Skip to content
Posted in Mitsubishi By Stuart LiveseyPosted on March 12, 2010September 14, 2018Tagged Mitsubishi i MiEV, Mitsubishi i-Miev in Australia 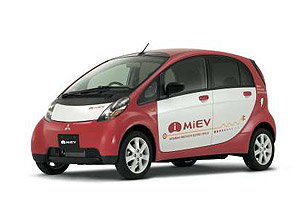 Queensland’s Minister for Climate Change and Sustainability, the honourable Kate Jones, was on hand to witness the arrival of the vehicles into Brisbane, and, along with customs, shipping and port authorities, presided over their first official Australian inspection.

The new arrivals are the first full-production electric vehicles ever to set their treads on Australian roads and are in the country for MMAL’s extensive pre-sale evaluation program. Over the coming months the vehicles will be tested in ‘real world’ situations by government fleets, private fleets and the media across the nation.

“The Mitsubishi i-MiEV has the ability to introduce a new era of environmentally sound motoring to Australia. The arrival of these vehicles brings the possibility of having large numbers of zero drive-time emission vehicles on our roads one step closer to reality. ”

The i-MiEV, which stands for Mitsubishi innovative Electric Vehicle, is a zero drive-time emission city commuter. A perfect vehicle for commuting over common distances in a city landscape, the i-MiEV is able to reach a top speed of 130km/h and has a range of around 160 kilometres* from a single charge.

The vehicle is a rear-wheel drive with three driving modes: Drive, Eco and Brake and takes approximately seven hours for a full battery charge from a normal 15 amp domestic household power supply.

The i-MiEV has been recognised internationally for its pioneering technology and its contribution to environmental protection. The vehicle has been on sale in Japan since July 2009, and Mitsubishi Motors Corporation (MMC) in Japan has signed memorandums of understanding with multiple countries, including the United States, United Kingdom, New Zealand and several European countries.

* Range may vary depending on a number of factors including use of climate controls, driving style, road conditions, number of passengers and the condition of the vehicle. Japan 10.15 Drive Cycle.

The Mitsubishi I-MiEV Arrives in Australia