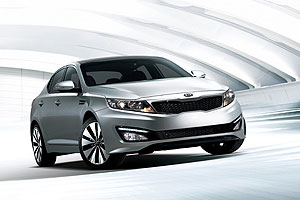 Here in Australia the Kia range seems to be currently lacking in anything approaching a large car … there are certainly none listed on the Kia website.

However that may soon change if Kia decided to import their latest version of the Kia Optima … also known as the Kia Magentis in some markets.

The Kia Optima … or Kia Magentis is set to make it’s debut next month at the New York International Auto Show.

“The next generation Optima possesses the power to surprise,” says Peter Schreyer, Kia’s Chief Design Officer. “It’s a car that people will simply not expect from Kia – and that’s exactly what we set out to achieve.” 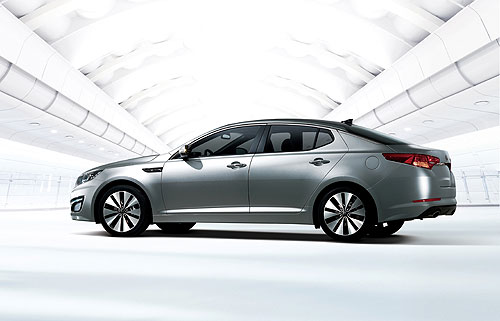 Kia says that the Optima “exudes an athletic confidence from every angle and shutline – its raked roofline, the high and pronounced shoulder line of its sculpted flanks and its extended wheelbase are complemented by boldly flared wheelarches and a shallow glasshouse that create a saloon with a muscular and self-assured stance.

“Longer, wider and lower than before, the Kia’s coupe-like profile is enhanced by the sweeping chrome arc that flows from A to C pillar, a distinctive design motif that visually lowers the car further still and enhances its cab-backwards proportions.”

A New Large Car for Kia?