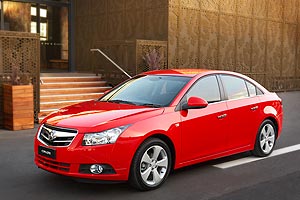 Holden Cruze … they’re sure ringing the cash register bells for Holden and for the last two months they’ve been rolling out of the showroom floors at an ever increasing rate.

The current Holden Cruze is built in Korea by Daewoo … a company that has been known to turn out a few less than stellar products in its time … but they seem to have hit the mark with the Cruze. In fact Holden are so impressed that they want to build the Cruze locally and we may see that start to happen some time in 2011.

So what do you get for your dollar in a Holden Cruze?

Well the Cruze comes in only two models … the CD and the CDX … and the price is definitely right. As I write this in mid-March Holden are offering the Cruze CD from only $23,990 drive away, no more to pay.

For that price you get a car that has a 5-star ANCAP safety rating, ABS, traction control, electronic stability control, six airbags, a six-speaker audio system with MP3 compatibility. You also get a 1.8-litre, 4-cylinder engine, and five-speed manual transmission.

Interestingly the manual version gives slightly better fuel consumption figures than the auto and Holden claim that the manual returns a combined economy figure of 7.0L/100km while the auto will give you 7.5L/100km.

There’s also a 2.0-litre diesel available in the Cruze CD and once again the manual version gives better economy figures than the auto with 5.7L/100km for the manual and 6.8L/100km for the automatic. The green rating for the petrol engine is 7 and 7.5 for the diesel.

The Holden Cruze CD runs on 16 inch steel wheels but the Cruze CDX is fitted with 17 inch alloy wheels. A full-size spare is available in both petrol models but the Cruze Diesel comes with a tyre sealant and air-compressor kit. 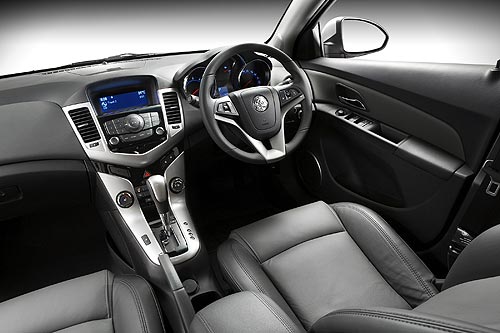 Comfort
As you would expect, both the CD and the CDX come with air-conditioning as standard and both models have 6-way adjustable driver’s and passenger’s seats. The CD has cloth seat trim while the CDX comes with leather for the seats, the gear knob and the steering wheel.

The front and rear side windows are power operated in both the Cruze CD and CDX. 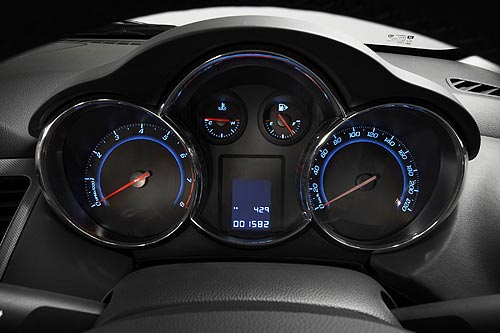 The dashboard
The dashboard features large speedo and tacho along with smaller fuel and temperature gauges. Between the main gauges in both models is what Holden calls a “Driver Information Display”. Information displayed here includes the gear the car is in (if it’s an automatic), odometer and trip computer functions, distance to empty, average fuel consumption and average speed.

More information is included in the Graphic Information Display that sits at the top of the centre stack. The information that can be displayed here includes time, date, vehicle personalization settings, audio information, air conditioning information and what the temperature is outside.

Safety
I’ve already mentioned the Electronic Stability Control, ABS and traction control both there’s even more in both models. Electronic Brakeforce Distribution is standard as is Brake Assist.

Other safety items that are standard on both the Holden Cruze CD and Cruze CDX include front airbags, side curtain airbags and side impact airbags, a safety diagnostic module, passenger safety cell, force limiters and seatbelt pretensioners. 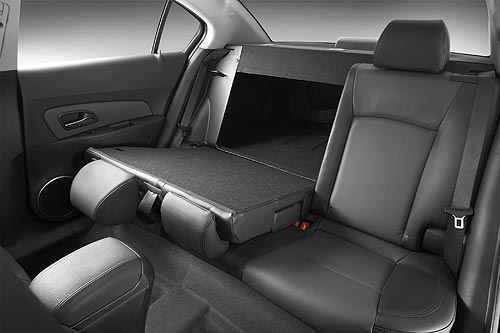 Luggage space
There’s plenty of storage space for small items throughout the car and the boot is a reasonable 400 litres. This can be increased by folding down one or both of the 60/40 split-fold rear seats that are standard on both models.

With a list of standard features like those mentioned above and great fuel consumption it’s no wonder that the Holden Cruze is popular with the buying public.

Here at AussieMotoring we’re eager to get hold of one next month and put it through its paces because we’ve not had a positive Daewoo experience in the past and it will be interesting to see if they’ve lifted their game with the Cruze.

Update 04.10.10
Down in the comments you’ll a question regarding the colour of the upholstery in the Holden Cruze. The guys at Holden are always extremely helpful and now I can show you the answer to the upholstery question. The two colours are Jet Black and Dark Pewter although the tones do vary depending on whether the upholstery is leather or cloth.

I should also note that our test drive back in April didn’t happen … unfortunately some family health issues got in the way and we had to postpone it.