Mercedes-Benz have announced that the new Mercedes-Benz E-Class Cabriolet is about to arrive in Australia and deliveries will begin this month.

For those who may think that an autumn release for a Cabriolet Mercedes-Benz has just two words for you … AIRCAP AND AIRSCARF … both are technologies developed by Mercedes Benz to make cool weather driving with the top down a very comfortable experience.

AIRCAP is an automatic draught stop that reduces turbulence for everyone in the car and Mercedes have been fitting AIRCAP to their top-down tourers since 1989 and it comes as standard equipment in all E-Class Cabriolets to be sold in Australia.

AIRSCARF is a neck level heating that ensures that passengers stay warm and is standard equipment on the E350 and E500 models but optional on the two four-cylinder models. 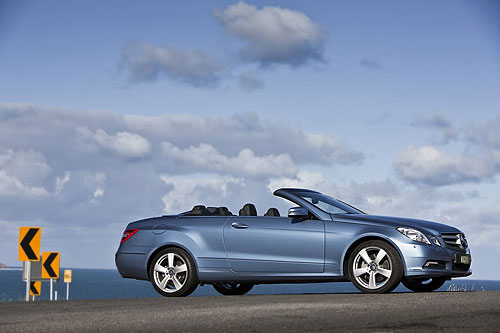 Of course when most drivers look at a Cabriolet cruising with the top down and there’s some rain clouds around there’s always the question mark over just how quickly the driver of the Cabriolet can get the top up when the rain starts coming down.

Engines
The Mercedes-Benz E-Class Cabriolet comes with a choice of four engines. The E500 Cabriolet is powered by a V8 petrol engine that develops 285kW of power and 530Nm of torque. Fuel consumption is 11.0L/100km for the combined cycle and CO2 output is 257g/km. 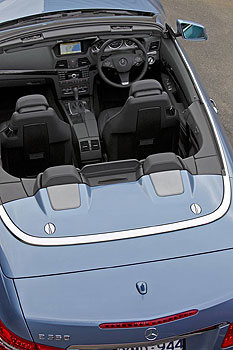 Mercedes-Benz does not expect the E 250 diesel-powered Cabriolet to arrive before the third quarter of this year while the petrol version will be available in May.

Safety
Driver and passenger safety is always an issue in a soft-top car and the new Mercedes-Benz E-Class Cabriolet offers extra protection with additional strengthening in both the A pillars and the plug-in B pillars as well as roll-over bars in the rear-head restraints that are raised and locked in position in what Mercedes-Benz describes as “a fraction of a second” if an accident occurs.

Nine airbags, belt tensioners and belt force limiters on all seats are standard equipment as well as head restraints for the driver and front passenger. 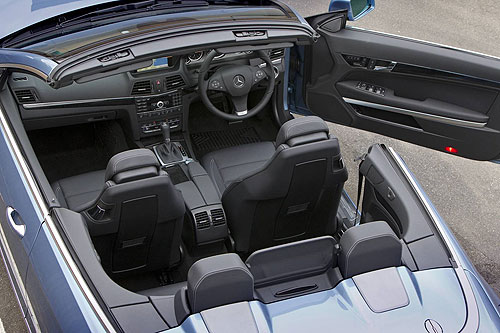