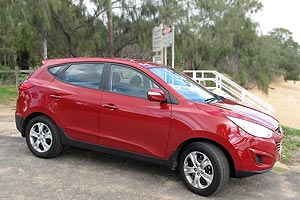 Ok before I tell you what it’s like to spend an entire week in a Hyundai ix35 I should tell you … in the interests of full disclosure … that over the years I’ve owned three Hyundai vehicles but that does not mean I’m a Hyundai evangelist by any means.

We started of with a late-model Excel … moved on to a Sonata and then quickly went up to a Grandeur when the Sonata turned out to be a total lemon. And we moved on from Hyundai’s when we shifted to a country town where the local dealer’s idea of customer service was basically to insult your intelligence.

So now that I’ve given you that disclosure and you’re thinking that perhaps I can be objective when it comes to Hyundai vehicles I’m probably going to raise a big question mark in your mind when I tell you that I really do like the Hyundai ix35 … and the doubt will probably get worse next week when I write the review for the Hyundai i30CW because it’s a great vehicle too.

But for now let me tell you about the ix35. Our test vehicle was the ix35 Active … the two-wheel drive base model in the ix35 range. While there is a manual version available Hyundai gave us an ix35 fitted with the optional six-speed automatic gearbox.

What I liked about the vehicle:

The review
So let’s jump into the full review. As I said, we road tested the Hyundai ix35 Active … it’s the base model in a range of that also includes the Elite and the Highlander. The Active has a 2.0-litre petrol engine coupled to either a five-speed manual or a six-speed automatic gearbox and the Active only comes with two-wheel drive. 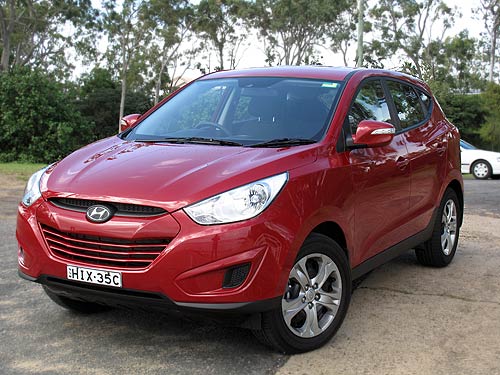 The Elite and the Highlander are both available with your choice of a 2.4-litre petrol or 2.0-litre diesel engine coupled to a six-speed automatic gearbox.

Engine and transmission
The combination of the 2.0-litre petrol engine and six-speed automatic box worked well in the test vehicle. Only once did I find it struggling to find the right gear it should be in and on hilly open roads there was no evidence of it trying to hunt through the gears

Acceleration was good and a quick stamp on the accelerator brought an immediate response. The cruise control was good too and held the car at the right speed up and down the hills. The highway patrol officer who tried to push Toni over the speed limit during part of one particular trip finally gave up and went looking for an easier target. 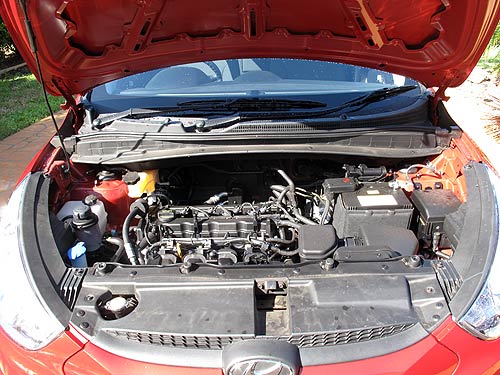 If you’ve looked into the engine compartment on just about any modern car these days and wondered how on earth a mechanic could ever work in there then the space under the bonnet on the ix35 will come as a bit of a surprise. It’s roomy and there looks like there’s plenty of access for servicing.

Fuel economy
Unlike some manufacturers Hyundai is fairly clear about the fuel economy that you can expect from the ix35 in city and country driving. Although we certainly tried our hardest we couldn’t replicate those fuel consumption figures but we did get very close to them.

Driver’s controls
The dashboard on the ix35 was clearly set out and quite easy to read. The shaping of the cowling around the dials means that the passenger can’t actually see the speedo so you may find that the level of backseat driving is diminished. 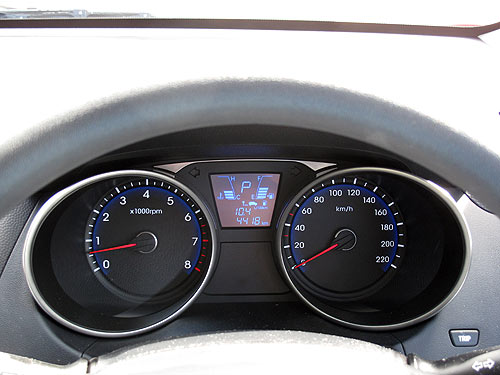 Hiding behind the ‘Trip’ is a number of different settings that can provide you with plenty of information. We chose to keep ours set to display the fuel consumption in litres/100km and this can be reset to zero simply by pushing the ‘Trip’ button in and holding it there for several seconds.

Comfort
What can I say about seats that really do support your back and provide plenty of support under the backs of your legs as well? As Toni pointed out in her first 24 hour report on the ix35 there are some manufacturers that could learn a thing or two about seat design from the seats fitted to this vehicle.

The driving position is good and you do sit in a slightly more upright position than you would in a normal car. I was certainly comfortable behind the wheel although Toni thought that she was sitting a little lower than what she would have liked.

Being the base model the ix35 Active doesn’t come with split-zone air conditioning but the air conditioner that is fitted to this model does an outstanding job of keeping the climate inside the vehicle at a very comfortable level.

I’m not sure I could have driven the ix35 if we there had been a need to transport our granddaughter and her capsule … but then not everyone who is going to drive one of these is over 185cm tall.

Unlike some modern cars the ix35 still comes fitted with an ashtray but it’s not what you would normally expect an ashtray to look like. Check the photos and you’ll see it sitting between the front seats looking not unlike a coffee cup. If you don’t smoke take it out and you have two cupholders.

The view to the rear of the vehicle is very good and personally I thought that the view provided by the side mirrors was one of the best in any normal vehicle that I’ve driven. The ix35 Active does not come with reversing camera as standard but I believe that it is available as an accessory and if you have small children then it’s something you should really consider fitting. 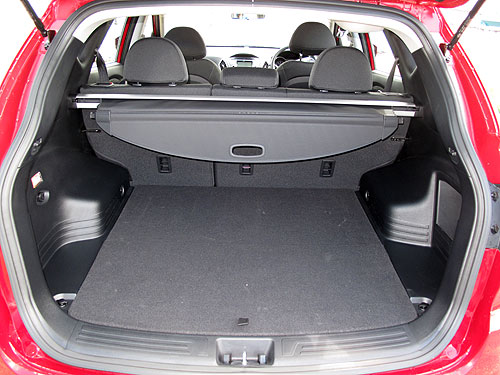 Luggage space
With the rear seats in the upright position there’s 730 litres of space and that’s certainly enough room to carry your average weekly grocery shopping. Fold the rear seats down and you more than double the carrying capacity of the ix35. You also have the usual 60/40 split seat option as well.

Folding the seats down is quite easy and there’s not a great deal of effort required to get them back into the upright position. 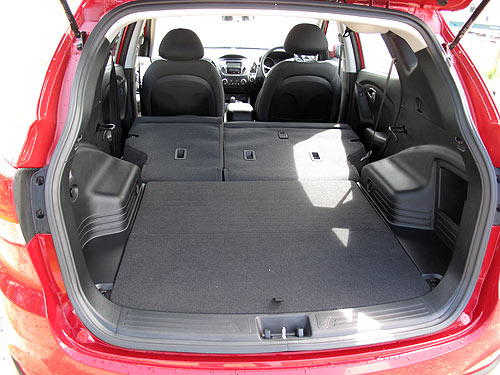 A sturdy cargo blind standard equipment in the base model and it’s quite a simple task to remove it if you want to carry something that sits higher than the blind.

Ride and handling
The ride around town was excellent and handling was all that you could hope for in any vehicle. It was easy to slip into tight parking spots and the great visibility that the driver has made it just as easy to get out of them.

Out of the city the combination of firm suspension and relatively short wheelbase can be a little uncomfortable if the road is rough but it’s certainly nothing like the rough choppy ride that the early short-wheelbase SUVs could give you.

The firm suspension is what you would expect in a good SUV that some people may want to take off-road. However, being a two-wheel drive I’m not sure that I would be too adventurous in the off-road conditions that I would take the ix35 Active into. 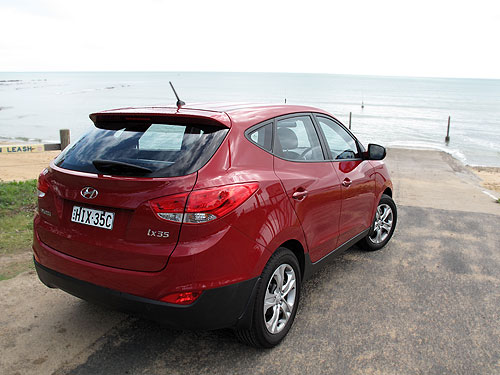 Overall
I really did like the ix35 … it was fun to drive and it was an easy vehicle to drive on short trips around town or out on the open road.

It certainly suited our lifestyle and I would recommend it to anyone who wants all the benefits of a small SUV.

It may not be the SUV for everyone but I was sorry to have to hand it back at the end of the week’s testing.