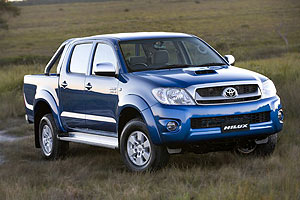 Maybe the HiLux isn’t quite as unbreakable as Toyota thought.

Toyota have begun the recall of 116,507 four-wheel drive HiLux vehicles produced for the Australian market between January 2005 and February 2010. The recall covers both petrol and diesel version of the 4WD HiLux but two-wheel drive vehicles are not included.

Details of the potential problem in the 4WD HiLux vehicles is clearly described in this excerpt taken from the official Toyota press release.

Condition:
In rural areas, if the vehicle is frequently accelerated or decelerated quickly on rough roads that feature extreme conditions, the rear tailshaft centre bearing support brackets may give way.
These conditions include severe corrugations and high numbers of cattle grid crossings.

Situation:
Only 19 cases of the condition have been reported in Australia.

One incident was reported. There were no injuries associated with this incident.

Next steps:
This safety recall is a preventative action and owners can continue to drive their vehicles.

Toyota Australia will contact affected owners, advising them to make an appointment with their preferred Toyota Dealer. This recall activity will be conducted free of charge.

Toyota Australia believes owners and prospective customers will understand that this recall activity demonstrates the robust process undertaken by the company to investigate the issue, identify the cause and develop and implement the solution.

One thought on “Toyota HiLux Recall”