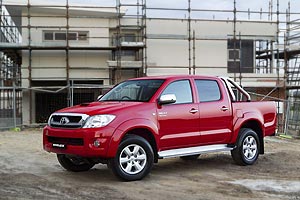 As the Australian Dollar appreciates against just about every other currency on the planet imported goods should become cheaper and motor vehicles are no exception. Right now the Aussie dollar is great if you want to import something and Toyota is prepared to share the good times with people who want to buy a Toyota HiLux 4WD.

In some cases the price point for some specific variants remains the same but the equipment level rises while Toyota is cutting hundreds of dollars from the option prices on other variants.

Toyota has added vehicle stability control and traction control as standard equipment. In addition, the existing anti-skid brakes have been enhanced with brake assist and electronic brake-force distribution.

The technical upgrade to this model also brings 17-inch alloy wheels, including a full-size spare, which replace 15-inch wheels.

The SR changes relate to the anti-skid brake option pack, which has been expanded to include substantial extra equipment while the price remains at $800.

Additional features for the pack include curtain-shield airbags and new sports-style buckets seats for the driver and front passenger, fitted with side airbags.

On 4×2 and other 4×4 HiLux models where customers can choose to add anti-skid brakes, the option price has been halved to $400.

On 4×2 HiLux models where anti-skid brakes and a limited-slip differential are offered as a package, the option price has been cut by $300 to $700.

**All prices are recommended retail prices only and do not include government or other statutory charges, insurance or dealer-delivery fees.

Toyota Upgrades the Ever Popular HiLux