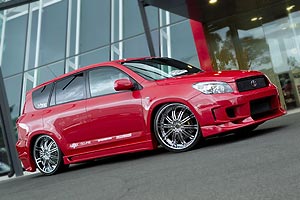 It doesn’t look like a Toyota RAV4 but that’s what it is. The highly modified RAV4 is the result of collaboration with Australia’s leading promoter of street car shows and events, Auto Salon.

“It’s getting increasingly difficult to do something original within the show car scene but, because the RAV4 is not a common subject for modification, the Toyota project gave us an opportunity to do something different.”

A custom-built airbag suspension allows the RAV4 to be lowered on its wheels by up to 25 centimetres for display purposes, and then raised again for driving.

The custom look is completed by new front and rear bumper panels, deep side-skirts and “shaved” external door handles – meaning they have been removed entirely and replaced by a remote control door opener.