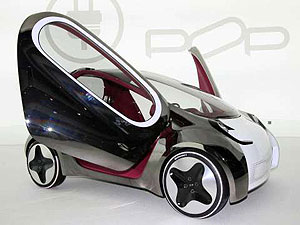 In case you hadn’t noticed, in the past Kia produced fairly conventional cars. They weren’t big on technological innovation and they certainly weren’t pushing the design envelope but things are changing.

Now that Kia has established itself as a major player in the international car industry Kia is starting to play with technology and design and their latest concept car is right out there on the cutting edge for both design and technology. As with most concept cars, the Kia Pop is unlikely to ever go into production but it’s displaying some interesting pointers of what the future might be like for Kia.

Obviously at just three metres long, electrically driven and fitted with just three seats the Kia Pop is designed as a city car but that’s just the start. … and it’s not slow either.

The striking side-window design, the high-tech feel of the dot-pattern head and taillights, back-lit front grille, rear-view cameras in each door, full-length glass roof, and the simplistic look of the wheels – all point to inspiration from outside the usual automotive spheres, such as gliders and high-speed bicycles.

Inside, the purple colour scheme creates a calm and peaceful environment within the space-ship like cabin. Facing the driver, a small piece of plexi-glass in front of the steering wheel shows a Transparent Organic LED (TOLED) display for speed, battery charge, and the other main readouts, when the car is running. At other times it is totally transparent.

To the right of the steering wheel, a sculpted, chrome-look panel features only one button, with every other function (audio, sat-nav, climate control, etc) controlled via an animated touch screen.

The front seat is a sculpted bench, with interesting, flowing lines, while the rear seat is positioned at an offset angle, resulting in remarkable legroom for a 1740 mm wide car with a wheelbase of just 2055 mm. Designed to accommodate a single passenger, this seat is a two-part affair, with a base that flips up when not in use and a backrest and a headrestraint integrated into the headlining.

POP is a fully-electric, zero-emissions car with a 50kW, 190Nm motor. It’s powered by highly efficient, compact lithium polymer gel batteries and is fully rechargeable in just six hours. Top speed is 140 kph, with a maximum range of 160 km on a single charge.