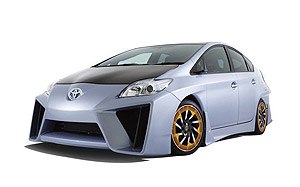 We’re not in the Prius equivalent of Kansas anymore Toto!

Last week when we were offering a friend of ours some suggestions about what car she should buy we avoided mentioning the Toyota Prius to her because … well … because it has an image problem.

It’s a great car and it does what it sets out to do really well but it looks like … well … not the sort of thing an empty nester who likes to let her hair down would care to drive. The Prius looks mundane … ordinary … plain.

And then we saw this Toyota Prius. Once it was one of those plain and ordinary looking cars that you wouldn’t want to drive … then Toyota in Japan passed it to their Conversions and Accessories group and it’s not plain and ordinary any more.

Sport suspension lowers the concept by 10cm in the front and 15cm in the rear. It rides on 18-inch forged wheels with aluminum aero rings and 215/40R18 eco sport tyres. 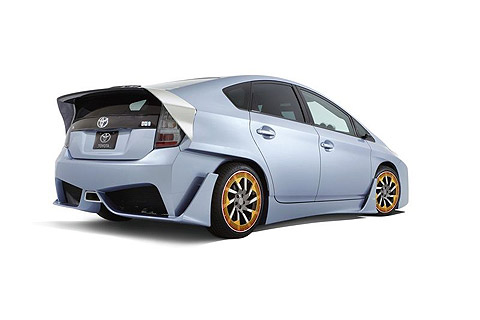 The interior also gets a workover with black suede highlights throughout, Recaro seats with embroidered “C&A” logos, and an additional gauge on the instrument panel featuring “G” output and mileage meters, along with a water thermometer and voltmeter.

It’s a pity it’s a one-off … our friend would have jumped at the chance to drive one of these.