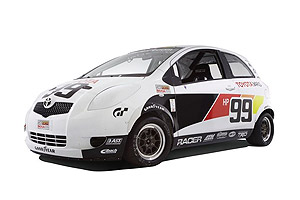 When you think of the Toyota Yaris you tend to think of little old ladies or trendy young city girls … you certainly don’t get an image of a car that could lay rubber in all forward gears. At least you wouldn’t think of a Toyota Yaris in those terms until you were introduced to the Yaris GT-S Club Racer.

This is a Yaris that’s been put on a diet to trim the fat and then given all the energy drinks it could handle and the result is some real performance and power.

The project began by shedding nearly 180kg from the standard Yaris kerb weight, losing creature comforts such as air-conditioning and the audio system.

The bonnet and hatch are made from strong, light-weight carbon fibre while the exterior graphics pay homage to Dan Gurney’s All American Racers-built IMSA GTP Toyota Eagle Racers of the 1990s.

Underneath the bonnet is Toyota’s 1.5-litre four-cylinder VVT-i engine, modified to boost power output by 36 per cent with bolt-on performance parts including the air intake, header, camshafts and cylinder head.

The interior includes a race seat and pedals, six-point harness and a steering wheel with a quick-release hub. The car sits on three-piece 13×7 racing wheels wrapped with 20.0 x 9.5-13 racing slicks.