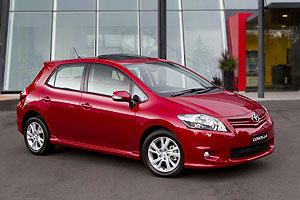 Toyota’s Corolla was Australia’s best-selling new car last month – the 12th time it has been the nation’s most popular vehicle.

Australians bought 4,536 Corolla sedans and hatches in November – 765 more than any other car – as Toyota retained its long-term number-one position.

The company’s total of 19,911 registrations for the month was higher than the combined totals of its nearest two competitors, and gave Toyota a market share of 22.8 per cent.

Toyota is now within just 7,000 vehicles of achieving 200,000 sales for the seventh consecutive year. No other company has ever reached that mark.

It has an overall lead of more than 70,000 over its closest rival and in excess of 105,000 compared with the third-placed company.

Toyota Australia’s senior executive director sales and marketing David Buttner said Toyota’s strong showing in November was not limited to the impact of its competitive retail offers on Yaris and Corolla.

“Toyota’s passenger-car sales in November were up 14.3 per cent on the same month last year; at the same time, our SUV sales were up 9.8 per cent,” Mr Buttner said.

Yaris was the best-selling light car and Camry is heading for its 17th year as leader of the medium segment.

The three top-selling SUVs last month were all Toyota vehicles – Kluger, RAV4 and Prado – with Prado leading in the contest to be the number-one SUV for the year.

Other segment leaders for Toyota in November and for the year so far are LandCruiser 200 Series wagon, HiAce van and HiAce bus.