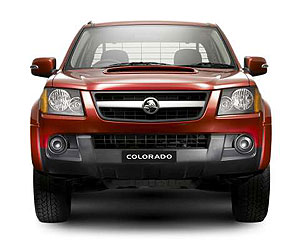 Colorado’s dual-fuel system, which complies with the stringent Euro 4 emissions standards, delivers 155kW of peak power, 300Nm of peak torque and a two and a half tonne towing capacity.

The 4×2 Cab Chassis comes fitted with a 56-litre cylindrical LPG tank located between the chassis rails while the Crew Cab models use a 76-litre toroidal tank located in the spare wheel casing. On all variants, the existing petrol tanks are unchanged.

Both models can be fitted with a default LPG switch that sounds a warning tone when the LPG tank is empty and the vehicle is running on petrol.

Holden’s dual-fuel LPG system is available as a $3,850 RRP (excl GST) vehicle option and is covered by a three year / 100,000 kilometre warranty.

A Government Rebate of $2000 on LPG Vehicles is available for eligible private vehicle purchasers. An additional rebate of $1000 may be available for vehicles registered in Western Australia.

For eligibility, refer to the Federal Government’s LPG Vehicle Scheme at www.ausindustry.gov.au.