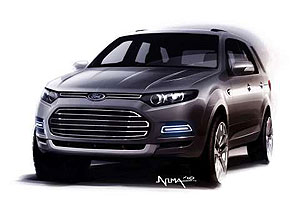 Ford have released an artist’s impression of the new Ford Territory along with a lot of words that say very little so let’s try and reduce all those words to just the bare facts.

Ford has also promised a number of technology highlights in the new Ford Territory as well as the introduction of turbo-diesel power.

Ford says that the “…Ford Australia team is taking the Territory to an all-new level of performance, refinement and quality, and customers will definitely experience these advancements when they drive it.”

But we’re going to have to wait till next year to measure those fine words against the real machine.