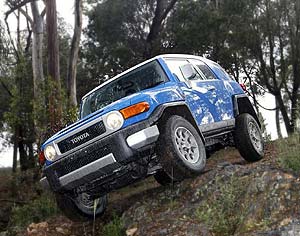 Toyota has released another teaser photo of its new FJ Cruiser and it should certainly whet the appetites of those who want a genuine off-road vehicle that doesn’t come with carpet and cloth-upholstered seats that you might never want to get dirty.

No, according to Toyota that’s not what the FJ Cruiser is all about although it does come with some creature comforts such as air-conditioning, an eight-speaker six-CD sound system with Bluetooth capability and steering-wheel controls, reversing camera and keyless entry.

What helps make the interior of the Toyota FJ Cruiser so attractive to people who want to get down and dirty is the seat and floor materials that are easy to clean after off-road adventures.

It’s been quite a few years since you could just turn a hose on the floor of an SUV to clean it. 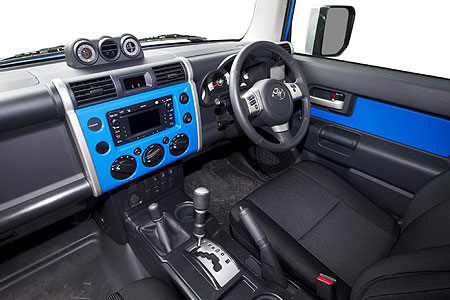 Toyota has also gone to some lengths to keep the dashboard and steering wheel simple so that even people wearing gloves can use the controls.

The interior is also designed to be flexible. The FJ Cruiser will seat five but the rear seat can be folded flat and the cushions removed to allow more carry space.

While the FJ Cruiser is new to Australia it has been around in America for some time and in the respected J.D. Power and Associates 2010 Initial Quality Study, it was rated at the top of the Compact Crossover/SUV segment.