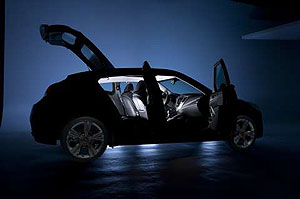 The Detroit Motor Show is currently underway and there have been some interesting cars, SUVs and people movers making their debut. Perhaps one of the most interesting vehicles is the Hyundai Veloster … a very different compact coupe.

Why is the Veloster so different? Well this coupe has three passenger doors … yep count them and understand that you’re looking at the left-hand drive version. So what you are seeing are the usual front doors for the driver and passenger and then on the passenger-side of the vehicle there’s a third door to allow access to the rear seats. There’s no rear door on the driver’s side of the vehicle. 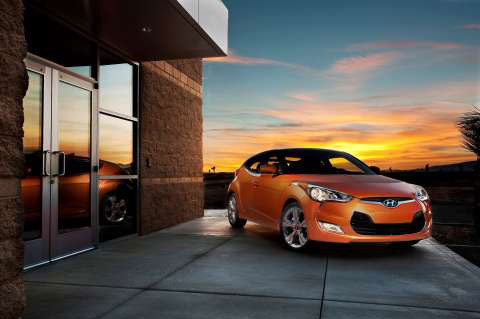 So what you’re seeing is a unique 3-door coupe that will get around 6L/100km on a highway cycle that Hyundai sees as competing with the Honda CR-Z, the Mini Hardtop and the Mini Clubman.

Design features
Apart from that unusual third door Hyundai have designed a vehicle that they say draws on high-performance motor cycles for inspiration. They even suggest that the centre stack and controls resemble the fuel tank and controls on a motorcycle. 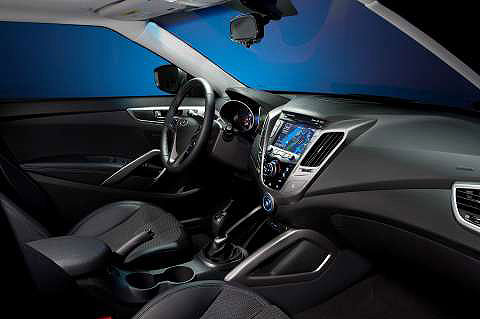 Take a look at the side view of the cockpit and you’ll definitely see the typical lines of a motorcycle’s fuel tank. Fortunately Hyundai won’t be asking you to straddle that ‘tank’ to drive the Veloster.

The engine
The new 1.6-litre four-cylinder engine fitted to the Veloster is the smallest Hyundai engine to use Gasoline Direct Injection (GDI) technology. GDI technology allows Hyundai to produce an engine that is low on fuel consumption and technology but high on output.

Hyundai suggests that Veloster’s DCT can be thought of as two traditional manual transmissions, each with its own clutch operating in parallel and alternating shifts. Veloster is a six-speed with one clutch acting on gears one, three and five and the other used for two, four, six and reverse.

This shifting process results in quick smooth transitions with none of the efficiency loss normally associated with torque convertors. The clutch actuator assembly features electric motors for actuation, and an external damper improves NVH.

This powertrain also has an Active Eco mode which modifies engine and transmission control for improved fuel economy that translates into more than a seven percent improvement in real-world fuel economy. 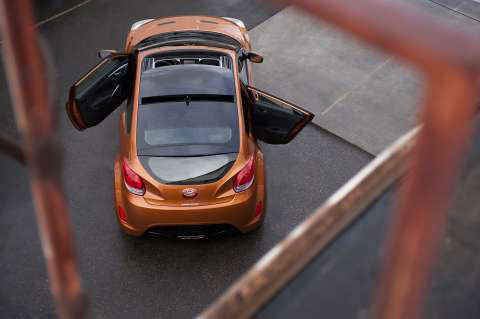 Suspension
The Veloster is fitted with a McPherson strut front suspension, coil springs, gas shock absorbers and a 24 mm diameter front stabilizer. The rear suspension is a light-weight V-torsion beam, a Hyundai-first with an integrated 23 mm stabilizer bar to allow bracing of the arms for greater stiffness and to further control body roll. The rear suspension also uses monotube shock absorbers for ride comfort.

VSM works to control two effects. The first is when a driver accelerates or brakes on a split-mu surface (slippery on one side, dry pavement on the other) and the vehicle wants to pull in one direction. VSM detects this condition and sends a signal to the MDPS to apply steering assist. VSM counters the pull and automatically provides eight Nm of counter steering. VSM reacts the same way during sudden lane changes or fast cornering.

The Veloster also features a state-of-the-art braking package. The package includes four-wheel disc brakes and an Anti-Lock Braking System (ABS) including Brake Assist, which provides maximum braking force when a panic stop is detected, and Electronic Brake-force Distribution (EBD), to automatically adjust the braking force to front and rear axles based on vehicle loading conditions.

Australian specs and pricing have yet to be decided and while we will certainly get the engine and transmission it’s unlikely that we’ll see the Pandora Internet Radio system or much, if any, of the Blue Link telematics system fitted to the Australian Veloster

If Blue Link is going to be featured on the Australian Veloster Aussie Motoring will give you a look at that interesting technology closer to the release date.

The Hyundai Veloster – a different coupe