Skip to content
2 Comments on A Little Car with Lots of AttitudePosted in News By Stuart LiveseyPosted on February 1, 2011September 14, 2018Tagged Toyota, Toyota iQ 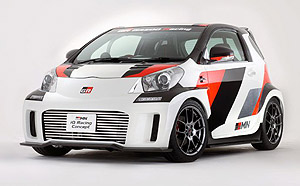 The Toyota iQ racing car might be a little car but it would give any street car a huge fright out on the race track.

Toyota built this car for display at this year’s Auto Salon in Tokyo and it’s definitely going to attract some attention. Sure there are plenty of cosmetic upgrades in this little beast including include a deep front air dam, huge lower air intake, racing wheels, massive spoiler, rear diffuser, and a dual exhaust system.

And it’s also comes with a roll cage, sports seats and racing instruments just to reinforce the idea that this is a racing car.

But there’s one thing that you can’t see from this single photo that Toyota has released and it’s what gives the Toyota iQ racing car some serious credibility. Sitting on top of the motor is a supercharger and a specially tweaked engine that can make this little car fly.

Toyota’s other iQ is a rather mild-mannered city car sold in Europe and Japan.

A Little Car with Lots of Attitude