Skip to content
3 Comments on Who Sells the Most Australian Built Cars?Posted in News By Stuart LiveseyPosted on February 7, 2011September 14, 2018Tagged Toyota, Toyota Camry 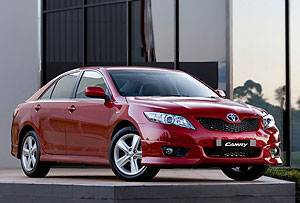 Quick … no peeking at the image … which car maker sells the most Australian built cars?

The answer may surprise you because it’s not Holden. Sure they sell more Commodores in Australia month after month and no other car maker comes close with a single model but Toyota build a heck of a lot more Camrys at their plant in Melbourne and exports most of them overseas.

Toyota builds more than 95,000 Camry models at their Melbourne plant each year and more than 70,000 of them are exported to more than 20 other countries.

Toyota’s Altona factory, which produces Hybrid Camry and the V6 Aurion in addition to Camry, is one of eight plants around the world where Camry is built. The other plants are in the United States (two), Japan, Thailand, China, Russia and Vietnam.

Camry was also the best-selling car in the United States last year with 327,804 sales – more than 45,000 ahead of its nearest rival.

Who Sells the Most Australian Built Cars?

3 thoughts on “Who Sells the Most Australian Built Cars?”