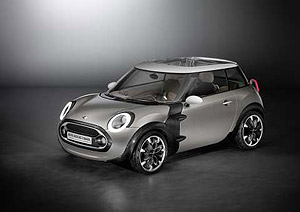 MINI isn’t promising anything though and at the moment they’re calling the MINI Rocketman a “study”. And it certainly is a study in versatility and driving fun.

The MINI Rocketman is just a tad over three metres long but it packs a lot into that small space. It’s also very light thanks to a carbon spaceframe construction and MINI engineers are suggesting that the Rocketman can be fitted with a drive system that will use just 3L/100km. 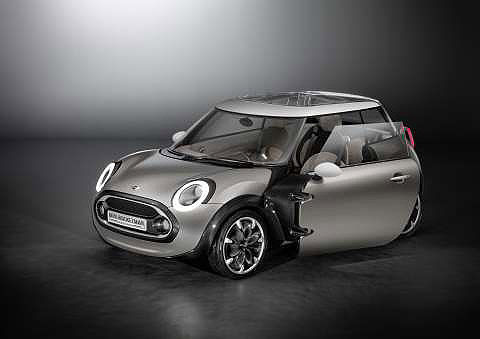 The doors are also interesting because they’re double-hinged and have intergrated sills so getting in and out of the MINI Rocketman is easy. The seats are contoured and can be arranged in a variety of different positions. This allows owners to choose between maximum driving fun two-up, a comfortable amount of room for three occupants, or even an exceptionally efficient division of space accommodating four seats.

At the rear there’s a two-part tailgate. The top part opens upward while the lower part opens downwards and extends to form a drawer.

MINI describes the Rocketman’s silhouette as powerful and maybe it is but when you see everything opened up the first word that might spring to mind is “Transformers”.

The dashboard
A cockpit instrument, positioned above the steering wheel and directly in the driver’s field of view, houses the rev counter and on-board computer display.

The large-format Centre Speedo with peripheral speedometer and multifunctional colour display also adheres to the system logic familiar from the current range of production MINI cars as far as display arrangement is concerned. 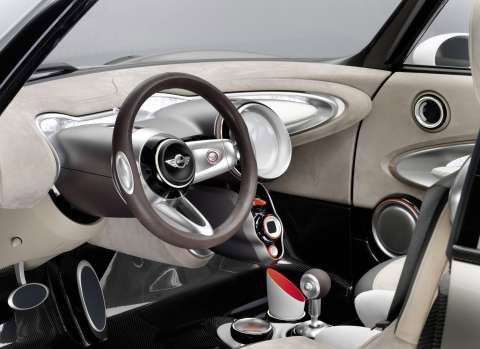 As with most concept cars, the MINI Rocketman certainly does look interesting and maybe one day we’ll have the chance to drive one off the showroom floor.