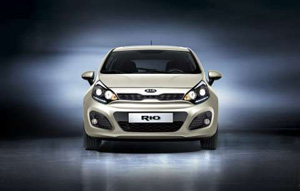 Back in the middle of January Kia released some artist’s impressions of the new fourth generation Kia Rio just to tease us a little. Back then the promise was that we would see more of the new Kia Rio at the Geneva Motor Show.

Kia has kept their promise and what we’ve got is a very classy looking that’s sure to attract plenty of attention from buyers who are looking for something special in a small car. That’s what Kia were aiming for with the new Rio because they plan on using this small car to grow their market share across the globe.

The new Kia Rio is (by 20mm), wider (by 25mm), and lower (by15 mm) and features a wheelbase extended by 70mm (to 2570 mm) than the previous model and for the first time Kia is offering both a three and five door version in Europe. Here in Australia we’ll see a sedan version as well … possibly towards the end of the year and the three-door version arriving early next year.

The engines
In Europe, the new Rio come with a choice of four three- and four-cylinder engines – with a 51-to-80kW power range – and an industry-leading CO2 base-line rating of just 85 g/km, plus fuel consumption as low as 3.2 litres per 100km.

In countries where diesel power is a popular option in this class the Rio will be available with two versions of Kia’s ‘U2’ power unit – both fitted with 16-valves and a WGT. The 1.4-litre generates 66kW and 216Nm of torque, while the 1.1-litre produces 51kW and 162Nm. Both engines deliver maximum torque from just 1750rpm.

Buyers who prefer their new Rio powered by petrol can select from a 1.4-litre Gamma or 1.25-litre Kappa engine. 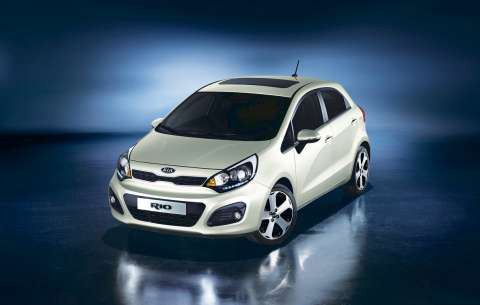 The updated ‘Gamma’ engine has friction-reducing modifications and dual CVVT (continuously variable valve timing), to achieve a responsive performance and competitively modest fuel consumption. With maximum output of 80kW and peak torque of 136Nm, this engine powers the fastest Rio – accelerating to 100kph in 11.5 seconds and reaching a top speed of 181kph.

Regular Rio models will have a CO2 rating of 94-to-124 g/km. In Europe, these figures can be further reduced by specifying Kia’s optional fuel-stretching ISG technologies (automatic stop-start, advanced alternator control, upgraded starter motor and low-rolling resistance tyres) – available on all models.

Equipped with ISG, Rio’s emissions will range from 85-to-114 g/km, so the two diesel models (under 100 g/km) qualify for local emissions-based tax savings, where available. For these models, fuel economy will range from 3.2 to 4.8 litres per 100 km, contributing to lower running costs.

Standard transmission for both diesels and the larger gasoline engine will be a six-speed manual gearbox, while the 1.25-litre 63kW engine has a five-speed box. A four-speed automatic gearbox will be available as an option on the 1.4-litre 80kW gasoline engine.

In this category performance is not always a selling factor so acceleration is not going to be what you might describe as sparkling. The fastest you’ll get from a standing start to 100km/h is 11.5 seconds in the 1.4-litre petrol version while the slowest is 16.4 seconds in the 1.1-litre diesel version.

Those times show that the new Kia Rio may not be fast off the mark but it certainly is going to be fuel efficient and less polluting for the atmosphere. 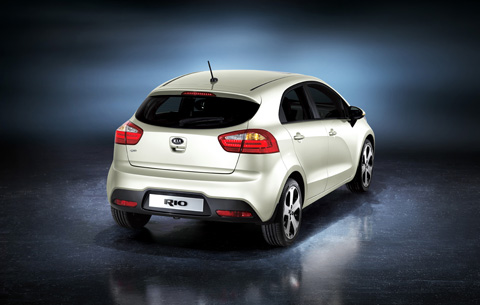 The exterior
Kia describes the changes to the exterior of the Rio as a revolution rather than an evolution but at the same time they want the Kia family lines to be recognized.

To lower fuel consumption and help achieve Rio’s class-leading emissions, Kia engineers have carried out an extensive programme to shed weight across a broad range of components. As a result, its weight-gain has been kept to a minimum.

An entirely new range of 10 body colours are now available in the Kia Rio range.

The interior
The interior for the new Kia Rio has also been redesigned. The basic dashboard has been retained but now there is a block of centrally located toggle switches intergrated into the central heating unit. These switches control some secondary functions.

Buyers can now choose from a choice of two-tone colours with Cognac Brown or Desert Grey combinations and high quality interior décor. 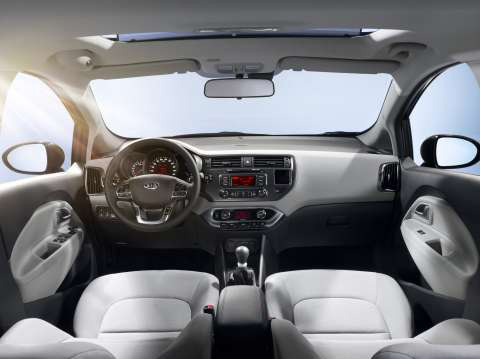 Even the luggage area has been improved in the new Kia Rio and it now has a 7 per cent larger carrying capacity than the previous model. The backrest of the rear seat is split 60/40 for maximum versatility. Users can fold the backrest down, to create an almost flat-floored load area.

Safety
In Europe, standard safety equipment will include up to six airbags and ‘active’ front seat head restraints (to protect against whiplash injury in a rear impact).

A new system called ‘ESS’ (Emergency Stop Signal) will be available for additional safety. To alert following drivers that the car is slowing rapidly, sensors detect when the driver is braking suddenly and hard, and then automatically flash the brake lights three times.

Disck brakes on all four wheels is now standard across the Rio range and these are complimented by ABS anti-lock, electronic brake force distribution and emergency ‘brake assist’ systems.

Prices
There’s no information available just yet on what the pricing levels will be for the new Kia Rio … they will be announced closer to the Australian release date.