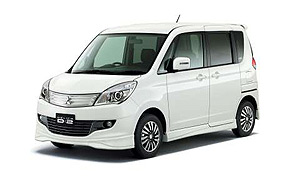 If the name doesn’t make your ears prick up and your heart beat faster then you’re not a true fan of what has become something that could almost be described as a cult car … the Mitsubishi Delica 4WD van.

They may look big and ugly but the Mitsubishi Delica has proven to be very popular with families who want to enjoy some off-road adventures and anywhere that four-wheel driving is popular you’re sure to see the Delica in the mix of vehicles rumbling through the dirt or up the beach.

While the Delica isn’t currently listed on the Mitsubishi Australia website the current version – the D:5 remains in production in Japan and now there’s a compact version too.

Mitsubishi Motors in Japan has announced the Delica D:2 a compact minivan version of it’s bigger brother thanks to an OEM deal with Suzuki.

Models in the range
The Mitsubish Delica D:2G is the entry level Delica D:2. It’s only available as a 2WD and features include standardized push-button ignition & keyless entry system, immobilizers and what Mitsubishi describe as “other high-end equipment”.

The Mitsubishi Delica D:2X is the mid-range version and it’s available as either a 2WD or 4WD. It features all the standard equipments on the G model, plus SRS side airbags for driver and passenger, automated air conditioning, and aluminum wheels.

The Mitsubishi Delica D:2S is the top of the range and it’s also available as a 2WD or 4WD. It includes all the features found in the X model plus power operated sliding rear doors on both sides, discharged head lights, front fog lamps, and more.

The engine and transmission
The engine in the Delica D:2 is a 1.2-litre 16-valve, double overhead cam petrol engine that’s coupled to a constant velocity automatic transmission. While that might sound as though the Delica d:2 is a little under-powered (and it probably is for some 4WD situations) the base model only weights 1,0000kg so it’s going to be enough to keep the Delica D:2 moving.

Availability
Well the Delica D:2 is probably not going to be seen here in Australia any time soon. Mitsubishi is only looking to sell around 800 units a month and the Japanese market will probably take every one of those it can get.