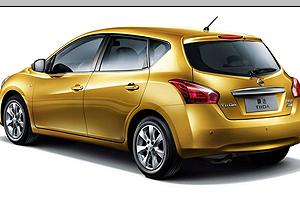 The Nissan Tiida first Australian showrooms back in 2006 and has undergone several face-lifts since then. Through all those changes the hatch has remained a rather unusual looking car but now there may be a new and much better looking Nissan Tiida on the horizon … and then again it might arrive in Australia as something else.

One thing is for sure though … this is the new Nissan global hatchback and it’s just been unveiled at the Shanghai Motor Show. It will be marketed in China as the Tiida but just what it will be here in Australia is still to be decided.

The new Tiida has a longer wheelbase (100mm) than previous models to give rear seat passengers more legroom and the width has been increased too.

Inside there are better seats, a floating centre cluster and armrests. Nissan has also worked to reduce the amount of vibration inside the cabin.

In China the new Nissan hatchback will also come with the option of a turbo-charged engine but there are no details of what we can expect here in Australia when it arrives next year.