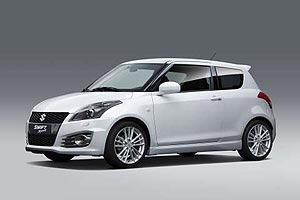 The new Suzuki Swift Sport has made its debut in Europe ahead of the Frankfurt Motor Show where we’ll be able to see it close up.

This is the first full model change for the Suzuki Swift since 2006 and, while its heritage is obvious the new Swift Sport certainly does look different.

Apart from the outward appearance the Suzuki Swift Sport has some changes under the hood as well. Perhaps the biggest change is a new 1.6-litre engine that was developed exclusively for the Swift Sport. The new engine delivers 100kW of power at 6,900rpm and 160Nm of torque at 4,400rpm.

And what’s a fiery new engine without a gearbox that has been developed for use with the new engine? Obviously Suzuki thinks that a new engine deserves a better gearbox so they’ve coupled the 1.6-litre engine to a specially developed six-speed manual gearbox.

The suspension has also been looked at and the new Suzuki Swift Sport now comes with struts that include internal rebound springs and an exclusive rear-suspension design.

Safety hasn’t been compromised either and the Swift Sport shares the same safety features as the Suzuki Swift and they include an imact-absorbing body plus seven airbags.

While the Suzuki Swift Sport will go on sale in Europe this year we will have to wait till next year to see it on the showroom floor and when it does arrive here it may have a different specification level.