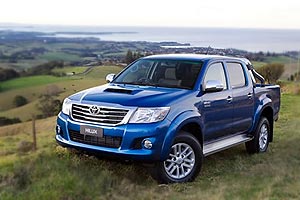 The new Toyota Hilux is here and it comes with new body panels, new audio systems, anti-skid brakes as standard across the range … and best of all, some price reductions on on SR and SR5 variants.

Oh and in a vehicle that already had 32 variants Toyota has added three more to the range but at the same time they cut four V6 petrol variants from the range … so there’s a wider range to choose from but not as wide as it could have been.

It would be easy to get bogged down in the technical details of all those 35 variants so instead we’ll just look at the three basic models in the new Toyota Hilux range.

The Hilux Workmate is the entry level model in the Hilux range and it comes in 4×2 and 4×4 variants in single or dual-cab versions. The WorkMate has new heater controls, a new audio system that includes Bluetooth connectivity and voice recognition for the audio and phone.

Upholstery in the WorkMate is basic vinyl with plastic door trim because the WorkMate is the workhorse of the Hilux range. There’s driver and passenger airbags along with anti-skid brakes and 15-inch steel wheels on the 4×2 variant.

If you step up to the 4×4 WorkMate you get extra instrumentation in the form of a tacho, shift-position indicator and cruise control in the auto model, dual-range transmission, limited-slip diff and 16-inch steel wheels. 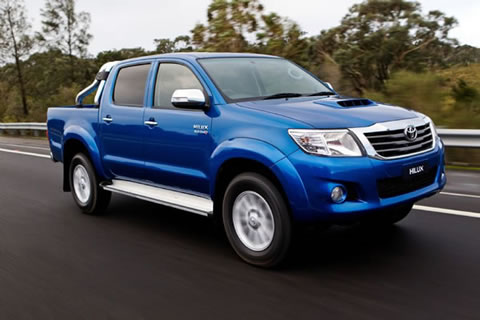 Somewhere between the basic workhorse and the top of the range recreational vehicle is the Hilux SR. The Hilux SR is available in 4×2 and 4×4 versions with your choice of single, Xtra or double-cab.

Obviously you get more in the SR than you do in the basic WorkMate and on the 4×2 version of the Hilux SR those extras include fabric seat and door trim, silver-accented steering wheel with audio controls, power windows, cruise control, remote central locking, limited-slip diff on the V6 models, body-coloured front bumpers an illuminated entry system. 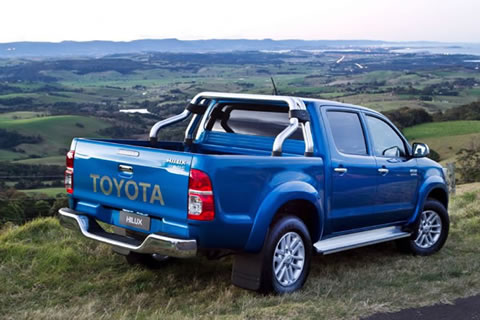 If you opt for the 4×4 Hilux SR you also get sports-style seats, upgraded fabric trim for the seats and doors, side steps and side seat and curtain airbags.

If you buy the double cab SR there’s an option pack that you can access as well. Included in the option pack are over-fender flares, better dash lighting, 17-in steel wheels and added safety features that include VSC, TRC, EBD and BA. 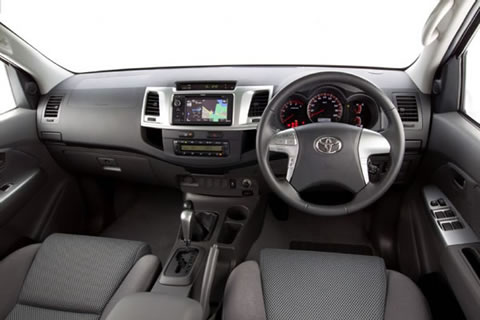 At the top of the Hilux range is the SR5 4×2 and 4×4 and while many may think of the SR5 as being something of a show pony because it appeals to people who may not necessarily need a fashion statement rather than a ute the SR5 is definitely just as much a workhorse as the less-well equipped versions of the Hilux.

In addition to all the features you get in the WorkMate and the SR the 4×2 SR5 adds dusk-sensing headlights, single-zone auto air-conditioning, 6-speaker sound system that incorporates navigation and Bluetooth, a premium steering wheel with audio and phone controls, 15-inch alloy wheels and a polished alloy sports bar.

And for the double cab version of the Hilux SR5 you can add side and rear privacy glass, a silver surround shift-lever … only on the auto … and safety features that include VSC, TRC, EBD and BA. 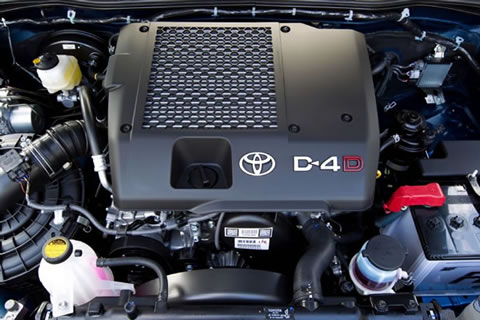 The new Toyota Hilux comes with a choice of three engines ranging from an inline four-cylinder and V6 petrol engine to a four-cylinder common-rail turbo-diesel.

The four-cylinder petrol engine is Toyota’s 2.7-litre 2TR-FE that comes with variable valve technology and twin counter-rotating balancing shafts along with a torsional rubber damper in the crankshaft pulley to reduce noise and vibration.

Maximum power from this engine is 116kW at 5,200rpm and maximum torque is 240Nm at 3,800rpm. Toyota has matched this engine to a five-speed manual or four-speed auto transmission and that combination gives 11.0L/100km for the manual and 11.5L/100km for the auto for the combined cycle

Fuel consumption is as low as 8.1L/100km for the combined cycle. 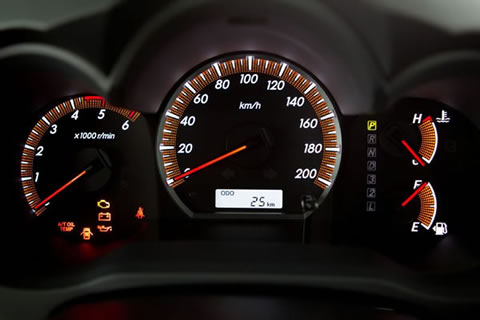 Toyota has worked on the suspension for the 4×2 Hilux models to give an improved ride. Toyota has also changed the damping valves on all models to improve the ride on rough roads.

But remember, this is basically a working ute so it’s not going to have the same ride characteristics as a soft-road SUV.

Hilux has been Toyota’s major success story in Australia for many years and it has been the one vehicle that has given Toyota the top sales spot in Australia for a very long time. But these days there are some serious contenders out there that just might take the gloss off the Hilux and Toyota’s sales figures and at least one of those contenders seems to offer a much better ride for those who are looking for a bit more comfort from their 4×4 utes.

Will the new Toyota Hilux fend off that competition? It will be interesting to see what happens in the coming months.

*All of the above photos are of the Toyota Hilux SR5. More photos of all three models appear below.