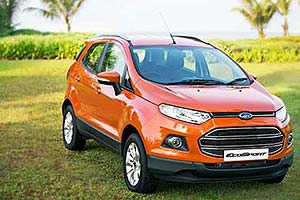 As if Ford doesn’t have enough SUVs in its line up … now there’s going to be yet another … the Ford EcoSport … due to hit the showrooms in December this year. But will Australian’s buy it?

Of course the Ford EcoSport isn’t exactly aimed at your average Australian SUV buyer … when we think of Australians and SUVs we tend to think big and Asian … or at least bigger than the EcoSport. And the EcoSport is built in India and comes with a 1.0 Litre engine … things that may discourage people from buying it.

Obviously Ford isn’t completely crazy though  … they are going to offer the EcoSport here in Australia with an optional 1.5 Litre petrol engine for all those who can’t get their head around the idea of driving a car with such a small engine.

And the Ford EcoSport is also going to come with a useful piece of technology that no other maker offers in the small SUV class so maybe there will be enough interest to translate into reasonable sales figures.

So what will we see when the Ford EcoSport arrives in December? A rugged but small SUV that has been around for a year or so and has been selling well in India. The standard 1.0 Litre EcoBoost engine delivers similar performance to a 1.6 Litre engine but with 20 percent better fuel economy.

Even Ford … in their press release … admits that the 1.0 Litre EcoBoost engine is small. They’re happy to tell you that it’s “tiny enough to fit on a sheet of A4 paper” and they’ve managed to wring 92kW of power and 170Nm of torque out of it.

For those who really can’t see themselves admitting to their friends that their new car has a tiny engine Ford has a 1.5 Litre petrol engine with twin independent variable camshaft timing available as an option. 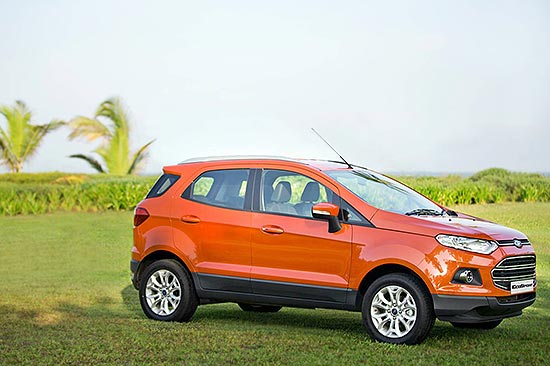 Other features include electric power-assisted steering with comes with what Ford calls “Pull-Drift Compensation” to make it easier to handle in tight parking spots and tight U-turns. And if you ever do take your EcoSport SUV off road then you will have peace of mind knowing that Ford says that the EcoSport can wade through 550mm of water.

Small vehicles of any type tend not to stand up well to unpleasant meetings with bigger objects but Ford says that the EcoSport is especially strong because the body is made up of high-strength and ultra-high-strength steel.

If that’s not enough then the suite of airbags fitted to the EcoSport will give you added protections. There’s the usual driver and front passenger airbags along with side and curtain airbags. There’s alos a driver’s knee airbag … that should be useful if you’re tall.

Technology does feature in this vehicle and apart from the usual Bluetooth, and driver-assist systems there’s also Ford SYNC. This gives the driver the ability to operate some functions by voice control. I’m sure you’ve seen it before in some of Ford’s ads for the Mondeo so I won’t go into it here but it is something that no one else offers in the class and it is something that will appeal to some people.

Ford says that we’ll learn more about the Ford EcoSport closer to the launch date … and hopefully get some more images to show you … so if you’re in the market for a small but rugged SUV then stay tuned.

Back in 2012 I suggested that the EcoSport would sell well here in Australia and despite my tone in this article I still think it will … but we haven’t seen a mad rush towards smaller engines in the time between that first article and this one so maybe the idea of a 1.0 Litre engine is still a bit too much for many Australians to cope with.