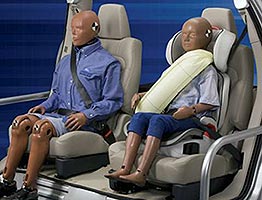 There is absolutely no doubt that seatbelts save lives and any driver or passenger who still believes that he or she doesn’t really need to wear a seatbelt is showing clear signs of the onset of insanity.

Yes I know they can be a pain if you’re jumping in and out of your car and if you don’t have them adjusted properly they be uncomfortable but what is nuisance value or discomfort when the option is dead?

However, while seatbelts undoubtedly save lives they can also inflict some minor injuries during accidents and they can leave behind some nasty bruises because crash forces are concentrated in the narrow area covered by the seatbelts.

While airbags can reduce those crash forces for front seat passengers up until now rear seat passengers have been left on their own to take whatever bruising is coming their way but at least for anyone riding in the backseat of a new Ford Mondeo things will soon change. 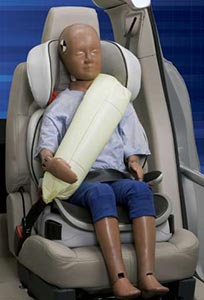 From the second half of 2014 … when Ford releases the all new Mondeo … Australia will see the introduction of inflatable seatbelts for rear seat passengers.

The inflated seatbelt’s increased diameter is more effective in holding the rear seat occupant in place and at the same time spreads the crash forces over five times more body area and so any injury caused by the seatbelt will be reduced. The inflatable seatbelt will also reduce head, neck and chest injuries.

If deployed the inflatable seatbelt’s airbag breaks through the belt fabric and expands sideways across the body. The airbag in the seatbelt fills at a slower rate than the dash airbags fitted to our vehicles because the seatbelt airbag is already close to the wearer so there is not the same need to bridge a gap similar to the one that exists between front seat occupants and the dashboard.

Now that Ford has introduced this technology I wonder how long it will be before we see inflatable seatbelts appearing in other models on the Australian market.