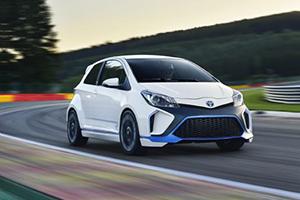 I don’t know about you but when I see the word Yaris I begin to think of little old ladies … little old men … Sunday drivers …. and before long I’m yawning and nodding off for a Grandpa nap. But if I ever get to see this little monster … the Toyota Yaris Hybrid-R in the flesh … there’ll be no Grandpa naps for me.

Oh no … there’ll be nothing like that … just a burning desire to get into the driver’s seat and put the pedal to the metal and let the 1.6-litre 4-cylinder turbo combine with the two electric motors to lay rubber down the street.

Unfortunately, while I may get to see the Toyota Yaris Hybrid-R … and I might even be allowed to touch it … it’s unlikely that I’ll ever get to drive the thing because it’s a concept car and no manufacturer wants to see their concept car in the sweaty palms of a scribbler like me.

But I can dream and if this hybrid ever makes it into production then the only thing standing between me and a red-hot go would be my wife.

Ok so let’s put dreams aside and let’s look at the reality of the technical details.

Under the bonnet
To produce the Toyota Yaris Hybrid-R Toyota have combined their very popular Yaris hatch with high-performance engineering and advanced hybrid technology that Toyota developed for their Le Mans racing programme.

The direct-injection turbo has been adapted to racing conditions and ,when combined with the 1.6-litre 4-cylinder engine, it develops 224kW (300hp) of power and 420Nm of torque. Then when you hook that up to those two electric motors you get 313kW (420hp) of power.

The petrol engine powers the front wheels while the two electric motors power the rear wheels and just so a driver has some hope of staying below the legal speed limit in the Toyota Yaris Hybrid-R Toyota has thoughtfully given the car two driving modes.

These modes are controlled from a button on the steering wheel and with a push of that button the driver can select either “road” or “track” mode and in ‘track’ mode the rear electric motors can reach their combined maximum peak power. 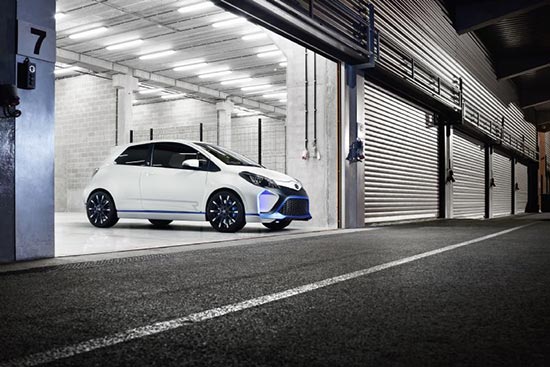 There’s also a third, smaller, electric motor located between the engine and the six-speed manual transmission that can operate as an advanced traction-control system.

At low speeds, or in a curve, when the engine power and torque exceed the grip potential of the front wheels, the motor can convert torque from the petrol engine into electric energy and direct it to the rear wheels.

The twin rear electric motors can also enhance handling characteristics during cornering by altering the distribution of torque between the left and right rear wheels, achieving the same effect as an intelligent torque vectoring differential.

Depending on the radius of the curve, the system can send more torque to the outside rear wheel, apply more braking force to the inside wheel or even brake and accelerate each wheel independently to promote a better driving line and to limit understeer.

If there is sufficient charge in the battery the Yaris Hybrid-R can even be operated in full electric mode for short distances. 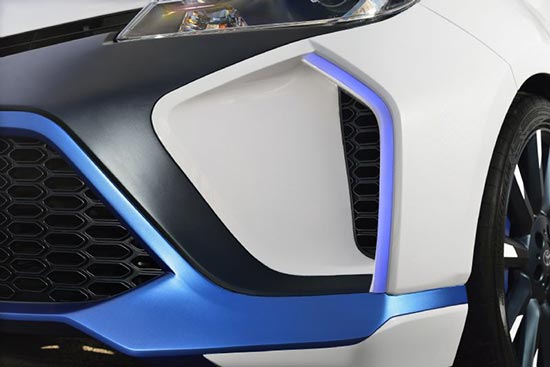 On the outside
New headlights, a wider front grille and details picked out in black and blue are highlights of the Toyota Yaris Hybrid-R concept as are the BIG air intakes that direct the airflow onto the brakes for cooling.

If you happen to be at the Frankfurt Motor Show next week you’ll get to see the first showing of this hot little Yaris.