With prices ranging from $53,990 for the 3.5 litre V6 up to $59,990 for the 5.7 litre V8 the Chrysler 300C is not going to be over-populating Australian roads anytime soon but Chrysler certainly hopes that it will bring “some passion back to the luxury sedan market.”

At least that’s what Gerry Jenkins, the head of Chrysler Jeep Australia, hopes. 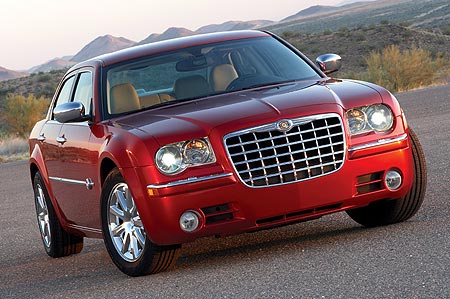 And will it succeed? Well one reviewer suggested that it certainly was a head-turner but who buys a car just to turn heads?

Ok … so I’m in the minority here and lots of people would think of buying this car just on it’s looks. I guess they would not be disappointed then to find that it really does perform … in a straight line. Nor would they be disappointed in all the creature comforts that come standard on this car.

In fact, if you bought this car only for it’s looks you wouldn’t even be disappointed by it’s around town fuel consumption – 16.1 litres per 100 km of city driving. But then what could you expect from a car that weighs in at 1.8 tonnes?

Chrysler will also be releasing a long wheelbase version of the 300C at the New York Motor Show this weekend. Whether that version actually makes it to Australia or not is yet to be determined.