Skip to content
5 Comments on The Bricklin SV1 – A Very Rare Sports CarPosted in General News, Vintage and Veteran By Stuart LiveseyPosted on July 12, 2006September 17, 2018

And there is one in Australia.

The Bricklin SV-1 was an unusual sports car. It was built in Canada mainly from parts sourced in Detroit and was only for sale in the United States.

The car featured gull-winged doors and an acrylic body built around a roll cage, side guard rails and a shock absorbing bumper bar front and rear. While you might wonder about the safety of a car made out of acrylic it was, in fact, a very strong and safe design that exceeded the safety requirements of its time. 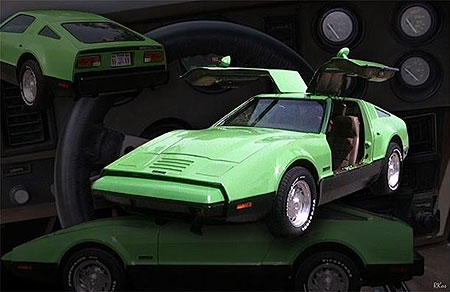 The Bricklin came with two different motor/transmission combinations. The first 155 Bricklins built in 1974 were powered by an AMC 360 cubic inch V8 that was coupled to a 4 speed manual transmission. The remainder of the 1974 build coupled the AMC motor to a 3 speed automatic transmission.

The cars built in 1975 were powered by a 351 cubic inch Ford V8, a 3 speed automatic transmission and standard equipment included air conditioning, an AM-FM stereo, a digital clock and many other features that were advanced for its time.

Only one model was ever built even though production commenced in June of 1974 and continued through into September 1975 with some vehicles being completed after the factory went into bankruptcy and closed its doors. In that time a total of 2854 cars were built of which 1500 still thought to exist although only 590 are documented.

The current owners reside in almost every state of Ameriica, several have found their way back to Canada and one is in Spain while another has recently been shipped to Germany. At one time it was known that there was a Bricklin residing in the Blue Mountains of New South Wales but the Bricklin International Owners Club has lost contact with the owner. If any one knows the whereabouts of it please post in the comments section. 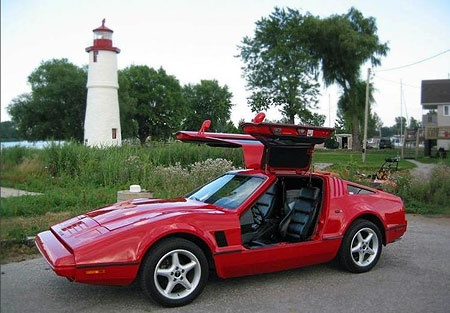 You can read more about this unusual sports car at the Bricklin site and I would like to thank Michael Mitchell from the Bricklin International Owners Club for his assistance in compiling this piece. I would also like to thank the owners of VIN 1168 and VIN 2355 for allowing me to use their photos.

5 thoughts on “The Bricklin SV1 – A Very Rare Sports Car”