A Driver’s Car with SUV Tendencies – or so they say

Kia Motors Corporation has released a preview sketch of the all-new Kue concept car, which will make its world premiere at the upcoming North American International Auto Show (NAIAS) in Detroit in early January.

The Kia Kue concept employs a different approach to the crossover utility vehicle segment by taking elements of what makes a CUV to a new level, namely performance.

Kue is designed first and foremost as a driver’s vehicle. While possessing SUV characteristics and capabilities, the Kia Kue focuses more on giving the driver an exhilarating driving experience on the way to the home improvement center than on how much it can haul. 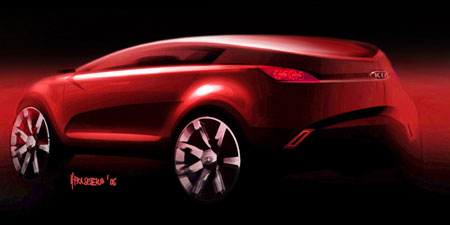 The Kia Kue has a monocoque platform that sits on 22-inch tires with a wheelbase of more than 114 inches, packaged in an overall length of 186 inches. Though purely a concept, the Kia Kue does, however, hint at future styling directions for Kia Motors.