Of course, it’s a BMW

Known as the Hydrogen 7 the car is based on BMW’s familiar 7 Series model and is equipped with an internal combustion engine capable of running either on hydrogen or on petrol.

With the BMW Hydrogen 7, the BMW Group is laying down a marker for sustainable mobility and this car will play a pioneering role in driving forward hydrogen technologies.

Together with clean, performance diesel engines and the technologically advanced hybrid systems currently under development within the BMW Efficient Dynamics project, the BMW Group has a clear strategy for sustainable mobility with hydrogen as the ultimate goal.

Running in the hydrogen mode, the BMW Hydrogen 7 essentially emits nothing but water vapour.

With all the comforts and amenities of a non-hydrogen BMW 7 Series, the BMW Hydrogen 7 is powered by a 191 kW twelve-cylinder engine that accelerates from 0 to 100 km/h in 9.5 seconds. 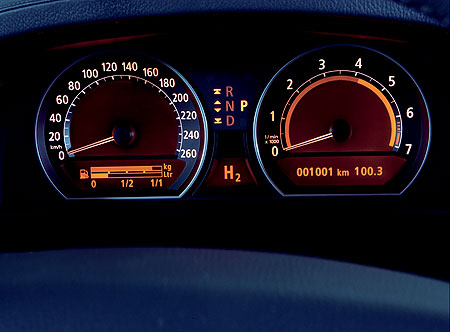 The BMW Hydrogen 7 also features a dual-mode power unit controlled “at the touch of a button” that can switch quickly and conveniently from hydrogen to conventional premium grade unleaded.

The car’s dual-mode drive provides a hydrogen mode cruising range of more than 200 kilometres, with another 500 kilometres in petrol mode.

With this overall cruising range of more than 700 kilometres, the driver of a BMW Hydrogen 7 is able to use the vehicle without problem even when the nearest hydrogen filling station is far away.

This technology is a viable solution until the hydrogen infrastructure is fully developed.

The BMW Hydrogen 7 emphatically proves that changing over to an alternative form of energy doesn’t mean missing out on superior driving dynamics and comfort.

The departure from fossil fuel does not in any way mean giving up the dynamics and performance typical of a BMW.