Motoring shows here in Australia can be a little bit of a let down. You can wander around and look … and some might even let you touch … but no one does what Jeep does in the US.

The New York Motor show is is on as a I write this and so is Camp Jeep New York. Camp Jeep is a display at the motor show where John Q Public can take a ride in a Jeep over a huge course of dirt, gravel, rocks and even a mountain – and it’s not just for specially selected members of the public. If you’re at the show and you want a ride all you have to do is stand in line. 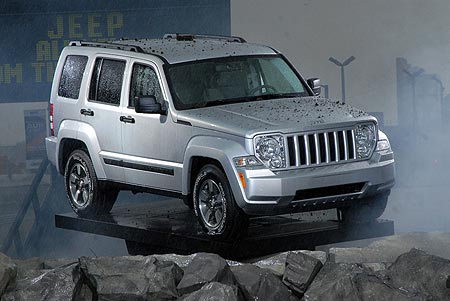 Of course taking a ride on a course like that could always turn a potential buyer off rather than on. I can remember many years ago when I was stationed in Lithgow there was a Suzuki 4WD dealer at Little Harley just at the foot of Mt Victoria.

He had a little rough terrain course set out in an adjacent paddock and if you were interested in buying one of his vehicles he’d take you for a run over the course. I’d almost convinced my wife that there was a Suzuki 4WD in our immediate future and she agreed to take a test drive.

Unfortunately her desire for an off-road vehicle evaporated when we hit the course and the first little hill was so steep she couldn’t see anything but blue sky over the front of the bonnet. From that point on there was never going to be any chance of us ever buying any 4WD … and the sad part is it wasn’t much of a hill at all … just a mound of dirt really 🙁

Putting on a Show – Jeep Wows the Crowds