Skip to content
Posted in General News By Stuart LiveseyPosted on June 5, 2007September 17, 2018

Official retail sales figures released by the Federal Chamber of Automotive Industries (FCAI) show that 38,331 motorcycles, scooters and ATVs (all-terrain vehicles) were sold for the first four months to April 30; an increase of 6251 or 20.5 per cent over the same period in 2006.

“These results are a continuation of the growth of the last few years and reflect an increasing trend towards the fuel-efficiency and convenience of motorcycles and scooters,” said FCAI Chief Executive, Peter Sturrock said.

The sustained growth has also resulted from the growing diversity of available models that allows more buyers to find the right bike for their needs.

The major contributors to the growth of the road bike market were cruisers and sports bikes. 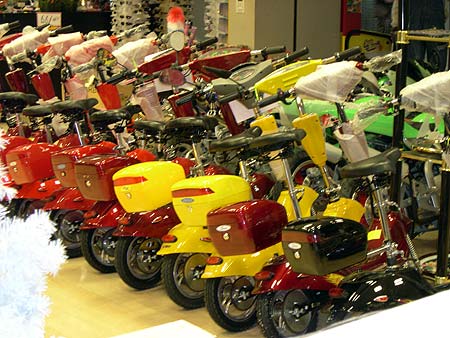 Photo courtesy of sideshowmom and Morguefile

The scooter boom continues unabated, with sales rising 19.9 per cent to 4991 to the end of April.

Following the launch of several new models last September, Yamaha (13.2%) has zipped into second place in the scooter segment behind market leader Bolwell (17.7%).

Total off-road motorcycle sales of 14,209 was enough to make it the largest market segment in the first quarter.

The enduro four-stroke segment led the way with sales of 3979, followed by four-stroke motocross bikes (3185) and minibikes (3159).

“While the increase in off-road bike sales have been somewhat affected by the drought, scooters continue to rise on top of their incredible sales growth of 43 per cent in 2006 due to their proven fuel savings and ease of operation,” said Mr Sturrock said.

The strong Australian dollar means that retail conditions in the motorcycle and scooter markets will remain very favourable for consumers into the foreseeable future.

Yamaha increased its total sales by 27.2 per cent to 9105 to capture number one position with 23.8 per cent market share.

Honda achieved total sales of 8910 to claim 23.2 per cent of the total market.

Harley-Davidson, which grew 30.4 per cent compared with the same period in 2006, was second in total road bike sales behind Honda but ahead of Suzuki, Yamaha and Kawasaki.