A suitable sports car for the 21st Century

When Toyota asked that question of their US design team the answer they produced was the Toyota FT-HS hybrid sports concept and it was revealed to the public earlier this year.

The FT-HS incorporates hybrid capability while maintaining sports car essentials, such as a sleek profile, lightweight aero-dynamic materials, and an advanced high-output powertrain for revolutionary acceleration and optimal performance. This 21st century sports car is fun-to-drive with eco-friendly benefits such as ultra-low emissions and fuel efficiency. The FT-HS appeals to an emerging buyer who grew up eco-conscious and perceives technology as a necessity, not a luxury.

This two-plus-two concept is a front-engine, rear-drive sports car with a projected zero-to-60 acceleration in the four-second range. A powerful V6, 3.5L-engine is coupled with a 21st century sports hybrid system with a target power output of approximately 400-horsepower. At a mid-priced market position, FT-HS would be a true “attainable exotic” with 21st Century performance. 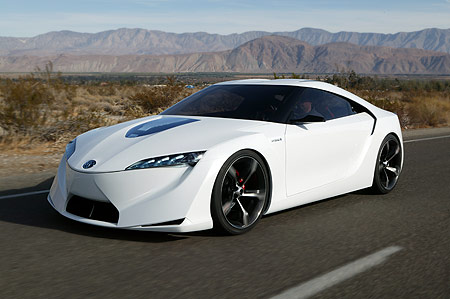 By eliminating the “B” pillar and creating a suspended “C” pillar, the minimalist style works in conjunction with subtractive mass. An integrated instrument panel surrounds the driver, creating an enclosed pod effect. Armrests flow seamlessly into the door and surrounding interior.

Seating is optimized for a lightweight appearance and function: the seating accommodates four and then coverts to a two-seater when the roof retracts. The passenger-seat area is open with a simple exposed airbag on the cross-car beam.

A telescoping hub-less steering wheel incorporates semi-automatic paddle shifters and allows the meter to be shifted forward in order to shorten the driver’s focus-time between the road and meter, and ultimately enhance driver focus.