Skip to content
Posted in General News By Stuart LiveseyPosted on December 21, 2007September 17, 2018

I don’t know about you but I’m one of those guys who likes to have lots of buttons and switches, gauges, dials, flashing lights and whirly bits on the dashboard of my car. There may be a bunch of computers driving my car for me but I want to at least pretend that I’m in control dammit!

So that’s why I’m never going to by a Tesla Roadster – you know, one of those electrict sports cars that are being developed in America that will do 0 to 100kph in under four seconds. Well to tell you the truth I’ll probably never be able to afford one but who wants to admit that they’re not buying a cool car like the Tesla simply because you can’t afford it?

Still, for a high tech car like the Tesla there’s not much on the dashboard as you will see from this photo. 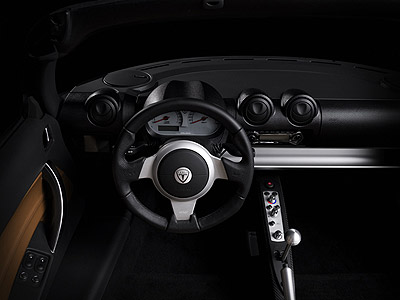 There are two gauges and an odometer on the dash and the centre console is positively lacking in knobs and buttons. There’s the hazard button at the top , two buttons – the purpose of which is unclear, a temperature control, two more buttons that do something, a fan control, a button that looks like it controls recirculating air and one that opens and closes the vents.

Below those is a gear selector and another button labelled TC and that’s it. I haven’t seen a dashboard so devoid of controls since my 1966 Mini 🙂

You can see more of the Tesla – a car that definitely has style and panache – at TeslaMotors.com

Of course the lack of dials and gauges and price is not the only limiting factor in buying a vehicle like this. Here in Australia there’s a problem with distance and this car will only travel 352km before the batteries need recharging and, in Australian terms, that’s not very far at all.