Skip to content
1 Comment on So You Think Your Roads Are Bad?Posted in General News By Stuart LiveseyPosted on December 23, 2007September 17, 2018

I’ve been driving now for a few months shy of 40 years and in that time I’ve traveled over some pretty crappy bush roads and tracks. I’ve even had to drive over some fire-trails that simply take your breath away – imagine what it’s like to to not be able to see anything on your right or left hand side – and sometimes not even the track in front of you because the fire trail has been hacked into the crest of a very steep ridge line.

That trip was 18 years ago and I still remember it … and I’m sure the lawyer who was riding with me has never forgotten it either even though she had her eyes closed for most of the 90 minute trip.

But most people have never encountered the kind of roads you’ll find on Fraser Island. It’s a major tourist destination and people live in various parts of the island too but despite that, this is what a main road looks like on Fraser Island 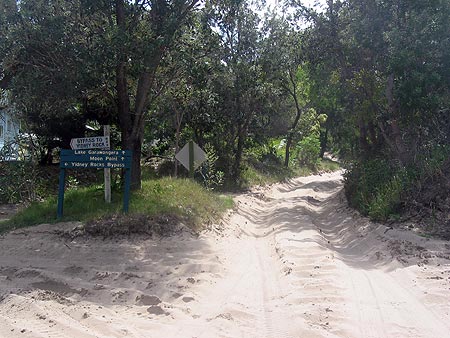 That’s one of the two main east-west crossings on Fraser Island and it doesn’t get any wider than that. Just imagine who you would feel if you were into that road and rounded a bend to find this coming the other way. 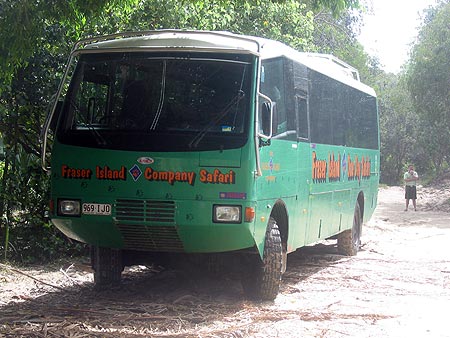 They’re big, they’re ugly and, in most cases they take up the whole road. On any given day there are as many as four or five of these big buses and as many slightly smaller buses on the roads on Fraser Island. They’re all 4WD, the bodies are made of aluminium (otherwise they rust too quickly), they generally need rebuilding every two to three years and they usually need replacing after about eight or nine years.

Oh … and did I mention that they take up the whole road and if you meet one you might have to reverse for kilometres to find a place to let him pass. There’s one spot, coming up out of Eurong Village where these big boys can’t be stopped otherwise they just don’t reach the top of the hill.

But not all roads on Fraser Island are quite that narrow. Between the beach and Happy Valley there’s actually a divided road but just don’t expect to get out of perhaps third gear – low ratio – while your on that road. 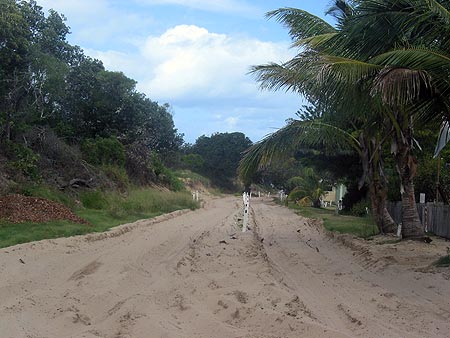 The sand is deep and even relatively light 4WD vehicles struggle to get through. 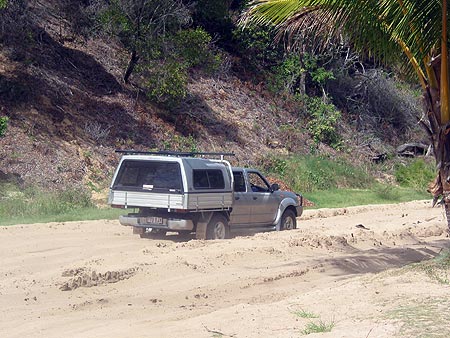 Of course there’s always the main north-south road and lots of people have heard about driving on the beach on Fraser Island. The beach is an officially gazetted road and it’s subject to speed limits – 80 km/h in most places. It’s also a road that the police patrol and from time to time they’re out there with their radar and random breath test stops too.

But frankly you would have to be crazy to drive on the beach at 80km/h unless you knew it very well. You see there are no lane lines (of course) and there are a lot of overseas tourists and inexperienced beach drivers so don’t expect vehicles to keep to the left. Rollovers are quite common. Nor should you expect to have the beach to yourself … even in quiet times there can be as many as 10 or 12 vehicles in sight at any one time.

There are three other driving hazards on the beach as well. The first one are the planes … 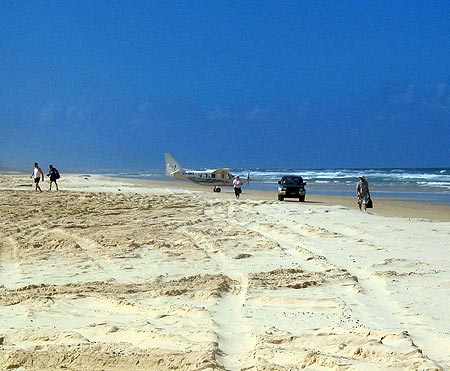 … I may have forgotten to mention that the beach is a road and a landing strip as well. It’s not uncommon for drivers to find that the planes just appear in front of them because the surf and the sound of the tyres on the sound make it hard to hear anything.

Then there are the freshwater creeks that run out of the sand hills, across the beach and into the ocean. Here’s a 4WD crossing one in this photo: 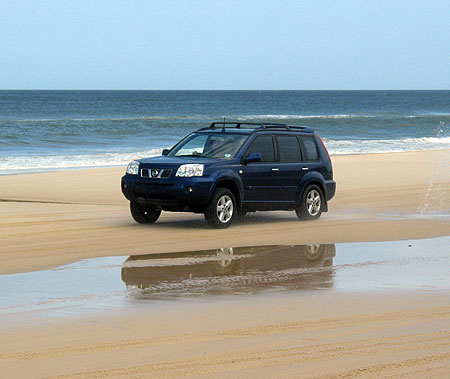 Many of them don’t look all that deep … until your heading down into the ditch and you’re wondering if you’re going to rip your sump out when you hit bottom. Many of them also change position from day to day and the outlets on one of the biggest creeks has been known to change by kilometres rather than hundreds of metres.

And the third driving hazard on the beach is the tide. There are two points on the island where the beach is submerged at high tide. You can get around one thanks to a short detour but the other … at the north end of the island … cuts Orchid Beach off from the rest of the island every day. If you want to drive up to that beautiful spot you need to get your timing right so the tide doesn’t leave you stranded.

Yep, if you you think your roads are bad just come over to Fraser Island and see what ‘bad’ really is. Of course, don’t try and bring your AWD or your 2WD … the barge operators will just laugh at you and send you home.

So You Think Your Roads Are Bad?