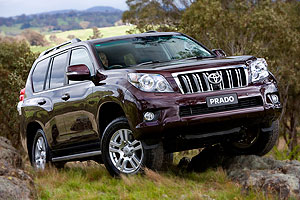 The new Landcruiser Prado went on sale in Australian dealerships last week and last Monday I got the chance to look over the range and drive several of them both on and off road and I have to say that I’m definitely impressed. This is a vehicle that will handle everything from the weekly shopping to clambering over the roughest terrain and just about anywhere you want to go in between.

There are 14 variants in the new Landcruiser Prado range spread between two body styles. For the first time since 1991 Toyota now has a short-wheelbase SUV on the market and, while they know that the long-wheelbase Prado will be the more popular of the two Toyota is still expecting the 3-door version to sell well in two quite distinct demographics.

The standard long-wheelbase Prado appeals mainly to buyers in the 31-40 age group and Toyota sees the short-wheelbase Prado appealing to younger buyers and to the gray nomads who want to travel and tow a caravan or camping trailer. With that older age group in mind, Toyota has managed to increase the towing capacity of the 3-door Prado to 3000kg … a 20% increase over the 5-door model.

Equipment levels
All Prado models come with an amazing list of equipment as standard … but then you would expect that in a vehicle that starts at $55,900 plus on road costs.

Standard equipment on all models includes 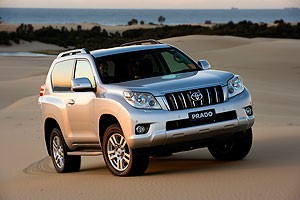 The 3-door Landcruiser Prado comes in flavours … the SX and the ZR. Both the SX and ZR are only available with a 3 litre turbo-charged common rail diesel and 5-speed sequential automatic transmission. Both 3-door models come with Hill-Start Assist Control and Downhill Assist Control and while you may not want to use these around town they could prove invaluable out in the bush.

The ZR is the top of the range in the 3-door Prado and it has an extensive range of additional features that include Crawl control (think cruise control of rough terrain), four camera Multi-Terrain Monitor, Multi-Terrain Select (think presets for a variety of rough conditions), touch-screen satellite navigation, refrigerated coolbox, moonroof and a variety of other creature comforts.

There are 4 equipment levels for the 5-door Landcruiser Prado.

The GX is the base model and it’s only available the turbo diesel engine. A 6-speed manual transmission is standard but you can upgrade to the auto box for an extra $2,500 and the auto option adds Hill-Start Assist and Downhill Assist Control 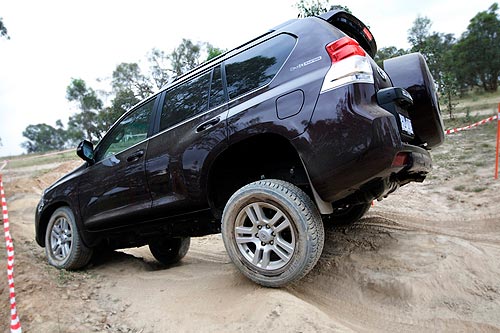 The GLX … the model that Toyota thinks will be the best seller in the range … comes with a choice of petrol or turbo-diesel engines, standard third-row seating, three zones of climate control, rear parking sensors and more. 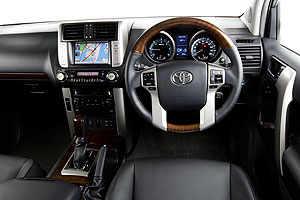 The VX has additional features over the GXL and this is the variant where the new electronically modulated KDSS suspension comes into the range (you can read more about it here).

Some of the other features found in the VX include rain-sensing intermittent washers, power-folding rear-seats, heated front seats, front parking sensors, steering-linked Adaptive Front-light System (think lights that can almost see around corners) and a multi-information display with controls on the steering wheel.

There’s no provision for a manual transmission in the VX and the starting price for the auto petrol is $74,490 plus on road costs and $75,490 for the auto turbo diesel

The Kakadu is the top of the range and it comes with everything you’ll find on the VX plus Crawl control, Toyota Adaptive Variable Suspension, height-adjustable and leveling rear air suspension, a rear entertainment system with three wireless headphones, two headphone jacks and an AV input and more.

There’s also a safety option pack available on the Kakadu that features a Pre-Crash Safety System, radar cruise control and steering wheel-mounted controls but if you have that fitted you’re going to lose your Crawl control, Multi-Terrain Select traction control and one of the terrain monitoring cameras.

What did I think of the Landcruiser Prado? 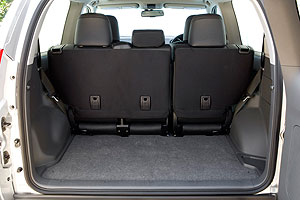 I drove the SX over both tarred and dirt roads as well as a small amount of paddock driving and found that it delivered none of the choppy ride that short-wheelbase vehicles seem to be notorious for.

My last short-wheelbase experience was in my son’s 1985 Toyota diesel and it’s like comparing chalk and cheese … these days you’ve got to be a hairy-chested Luddite to enjoy driving one of those … ok so I admit … I enjoy driving it … but I also enjoyed driving the new Prado. 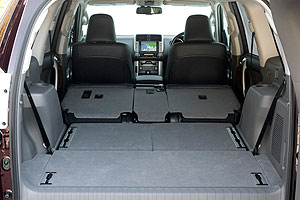 The visibility was excellent, the seats were comfortable and headroom in the front was good. I’m around 184cm tall and I had no problems putting the driver’s seat back to a position where my knees weren’t up around my ears.

While I didn’t sit in the rear seats another motoring journalist who did suggested that for him … and he wasn’t tall … headroom was somewhat restricted.

There’s some good luggage capacity in the rear and if you want more the rear seats fold down to give you even more.

Ground clearance is excellent and, as you would expect with a short-wheelbase vehicle, you can clamber over a lot rougher terrain than you can in the long-wheelbase versions. 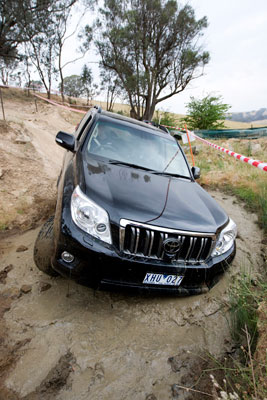 The I took a ZR over some very rough and specially designed 4-wheel drive courses constructed by the Orange Four Wheel Drive Club for their competitions and used the preset Multi-Terrain Select, the Crawl control and the Multi-Terrain Monitors just to see what they would be like to use.

The Multi-Terrain Monitor not only shows you what the ground looks like outside but it also shows you where your wheels are pointing. Frankly I thought that they would be a waste of time but it didn’t take long before I was consulting the display to see where best to aim the wheels at the top of every crest I came to.

In the rough terrain the seats hold you firmly in place and the suspension makes the roughest terrain quite bearable. However, as with all things electronic … they’re not infallible and while the Crawl control is an outstanding bit of kit it can be pushed beyond its limits.

Some light rain fell during the day and while the Crawl control held the vehicle in check on one particularly steep entrance to a creek when the approach was dry I arrived just after the rain and the Crawl control couldn’t handle the conditions. I slid straight down the slope and hit the bottom of the creek with a thump … at least the airbags didn’t deploy.

That’s me coming out of the water wondering whether I still had a sump or not.

Later in the day I spent two hours driving over tar, dirt roads and some very rugged fire trails in the Prado Kakadu and I was impressed once again. I simply stuck the gear selector in drive and left it in high-ratio and the only thing that slowed me down was the vehicle in front.

The Kakadu took it all in its stride and kept us well insulated from the heat and dust outside. 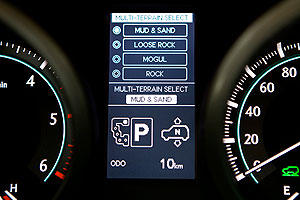 Was there anything I didn’t like about the new Prado?
Well the drive in both vehicles was too short to really get a good feel for the vehicle but for me … with a bad back … the seats weren’t quite there. If anything they were a little too comfortable if that makes sense.

The steering didn’t really give me much feel for the road. Of course I could feel the rough stuff but on the tar and on the dirt I wasn’t getting the feedback through the steering wheel that I find myself looking for.

And there’s a bit of a lag between hitting the accelerator and actually moving off from a set of lights … especially if you want to get away quickly.

So would I buy one? Well perhaps you should ask me again … after I’ve had more time behind the wheel.