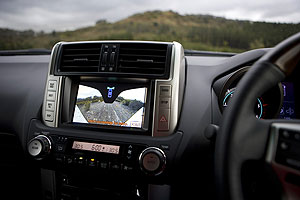 At the media day for the release of the new Toyota Landcruiser Prado last Monday those of us who attended were introduced to Toyota’s Multiview Monitor … a system of four cameras linked to a monitor on the dash of the 3-door ZR Prado and the 5-door Prado Kakadu.

Cameras are mounted on the front grill, under each exterior mirror and on the cover of the spare tyre and they give drivers the ability to see what’s in front, to each side and behind the vehicle.

When I first saw the system I wondered practical use something like that could possibly be but it wasn’t long into the first mogul course and I was plotting my next move using those cameras that I thought weren’t going to be of much use.

The video will show you some other good reasons why using the Prado multiview monitor system makes good sense.