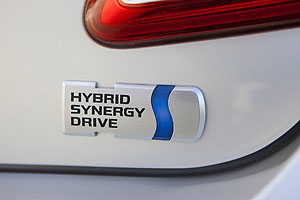 There are basically three types of hybrid system: series, parallel and the combination of both, the series-parallel system used by Toyota.

The series hybrid
The series hybrid drivetrain is the simplest hybrid configuration because the electric motor is the only means of providing power to get your wheels turning.

The motor receives electric power from the battery pack, which is charged by a generator powered by a small on-board internal combustion engine or by using plug-in technology. The engine is typically small and the battery pack has to be powerful enough to provide peak driving power needs.

As there is no mechanical connection between the engine and the drive system, a series hybrid hauls around a petrol engine that isn’t available to directly propel the car.

The Chevrolet Volt will be a plug-in series-hybrid. GM refers to it as an electric vehicle and describes the petrol engine as a range extender. 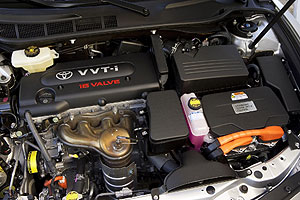 The parallel hybrid
With a parallel hybrid, both the engine and the electric motor generate the power that drives the wheels. The addition of computer controls and a transmission allow these components to work together and this is the technology in the Honda hybrids, called Integrated Motor Assist.

The engine is the main power source, while the motor assists with acceleration; in other words, the motor is there to help out the engine. Unlike Toyota’s system, the petrol engine is unable to charge the battery and propel the car at the same time.

Parallel hybrids can use a smaller battery pack and therefore rely mainly on regenerative braking to keep it recharged. However, when power demands are low, the motor can act as a generator for supplemental recharging, much like an alternator in conventional cars.

As the engine is connected directly to the wheels, it eliminates the inefficiency of converting mechanical power to electricity and back, which makes these hybrids quite efficient on the highway.

Yet the same direct connection between the engine and the wheels that increases highway efficiency compared with a series hybrid does reduce, but not eliminate, the city driving efficiency benefits. In other words, the engine operates relatively inefficiently in stop-start driving because it is forced to meet the associated widely varying power demands. 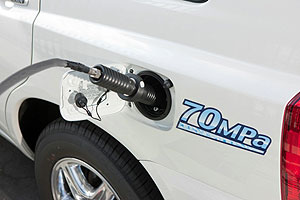 The petrol engine can drive the wheels directly and it can also be effectively disconnected from the wheels so that only the electric motor powers the wheels, saving fuel and cutting emissions. Prius has made this concept popular.

As a result of the dual drivetrain, the petrol engine operates at near optimum efficiency more often. The vehicle can run on just the motor or on a combination of engine and motor power for efficient driving.

At lower speeds, it operates more as a series hybrid vehicle. At high speeds, or in situations with high power demands where the series drivetrain is less efficient, the vehicle operates more like a parallel hybrid.

In this situation, the internal combustion engine takes over and any excess energy is stored in the battery for future use. The stored energy can also be used to provide extra power in tandem with that provided by the petrol engine.

This system incurs higher costs than a parallel hybrid because it needs two motor/generators, a larger battery and more computing power. However, Hybrid Synergy Drive has the potential to perform better than either of the other systems alone.

Power allocation is controlled to ensure the best efficiency. As necessary, the generator also recharges the battery from surplus engine power. Under hard acceleration, the battery supplies additional energy to boost drive power, while the engine and motor provide smooth acceleration response.

When the driver brakes or slows down, the motor acts as a generator, driven by the car’s wheels – providing regenerative braking. It recovers the kinetic energy that is normally lost as heat, converts it into electricity and stores it in the battery.

The petrol engine automatically switches off when the car is stationary or coasting, which saves fuel and reduces exhaust emissions. Neither Prius nor Camry Hybrid requires special training to drive – they operate like normal cars.

The blended series-parallel approach of Hybrid Synergy Drive makes more sense to Toyota than the alternatives.

Hybrid Drive Systems – how they work

One thought on “Hybrid Drive Systems – how they work”